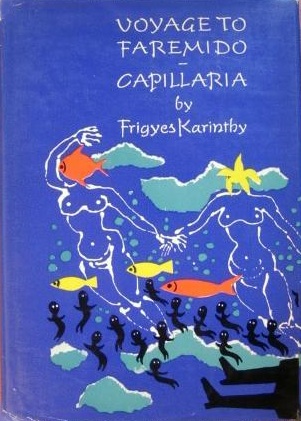 It’s 1914, and Jonathan Swift’s Lemuel Gulliver is eager to go to sea again. He signs on as a surgeon on a British ship, only to be torpedoed, then picked up by a UFO and transported to Faremido, a planet ruled by intelligent machine-folk. They regard organic life as a loathsome disease of matter, so they’re pleased that the Great War looks likely to exterminate humankind. Agreeing that the Faremidoans (whose society is peaceful, and whose fa-re-mi-do language is musical) are superior beings, Gulliver accepts an injection of their own brain-matter — quicksilver and minerals — into his head. Now a proto-cyborg himself, Gulliver is sent back to England, where he finds it difficult to adjust to the irrational horrors of everyday life.

Fun fact: The sequel to this Hungarian novella is Capillária (1921), in which Gulliver gains insight into sexual politics when he visits a submarine civilization whose women dominate and eat their menfolk.