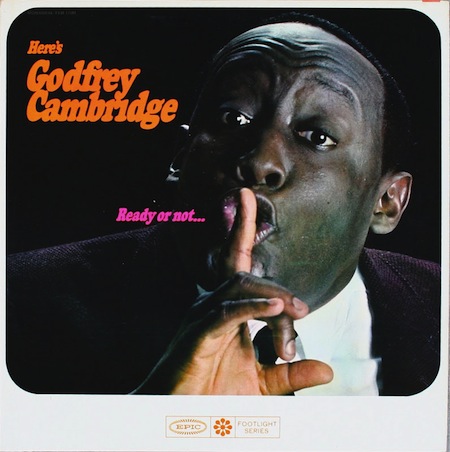 On September 24, 1957, GODFREY CAMBRIDGE (1933–76) made his national television debut on The Phil Silvers Show. Though uncredited, the Nova Scotia and NYC-raised son of Guyanese parents, graduate of Flushing High School, Queens, and former judo instructor, was a private in Sgt. Bilko’s platoon now and thus he spoke: “Hey, Sarge; why don’t we lend Fender the money from the welfare fund?” A modest start, perhaps, but within a few years, Cambridge had won acclaim in two landmark plays: Jean Genet’s Blacks (1960) and Ossie Davis’ Purlie Victorius (1961). In 1964, multiple Jack Paar Program appearances and the first of an eventual four superb stand-up comedy albums brought Cambridge’s fiercely intelligent, race-conscious yet jovial personality to the masses. Dividing his time between stage and screen, Cambridge co-starred in How To Be A Jewish Mother (1965) with Yiddish theater veteran Molly Picon; played a CIA agent in The President’s Analyst (1967); and — because he had mazal — a Jewish cab driver in Bye Bye Braverman (1968). Melvin Van Peebles’ Watermelon Man and Ossie Davis’ Cotton Comes To Harlem (both 1970) saw Cambridge excelling in a new, black-directed cinema whose greater possibilities the subsequent “blaxploitation” genre would largely reject. Later, sometimes laughter failed. “If you’re white, it’s all right to put a fence around your property to keep niggers out,” said Cambridge in 1975, following a property dispute with town authorities in his Ridgefield, Connecticut home. “But if you’re black, the only fence they want around you is a jail fence.”

On his or her birthday, HiLobrow irregularly pays tribute to one of our high-, low-, no-, or hilobrow heroes. Also born this date: Pierre Mac Orlan, Fats Domino, Johnny Cash, Karen Berger.