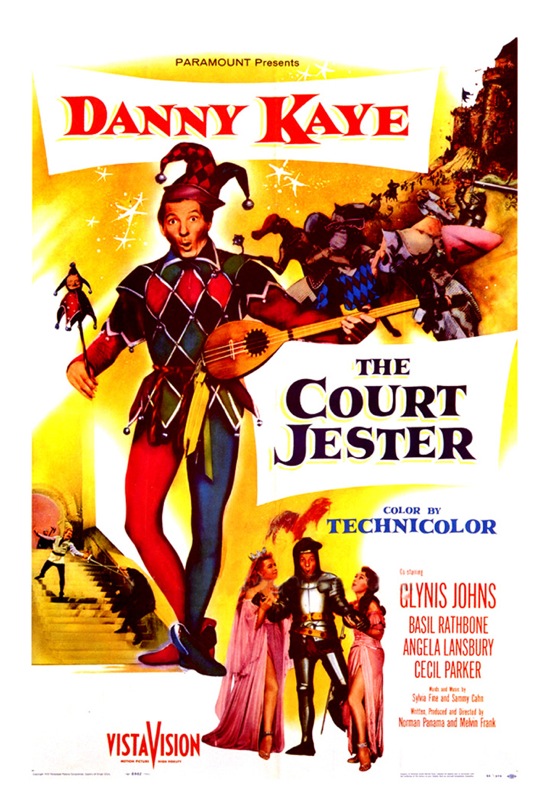 A high school dropout who learned his trade on the Borscht Belt summer circuit, DANNY KAYE’s (1913-87) first taste of Broadway fame came with the 1941 Gershwin-Weill tongue-twister “Tchaikovsky (and other Russians),” in which he spat out, scat-style, the names of 54 Russian composers in under 40 seconds. During World War II, he entertained the troops with his sophisticated yet silly portrayals of soldiers from both sides; his ability to mime and improvise, along with his rubbery face and ridiculous dialects, made him a wildly popular entertainer. During the early Cold War era, he was equally at home on television, radio, and the stage, convincing audiences worldwide that everything was tickety-boo; and he raised millions for charity by conducting fundraisers, sometimes using a flyswatter (for “Flight of the Bumblebee,” of course) as a baton. He was most famous, perhaps, for his role in The Court Jester (1956), in which he switched, under hypnosis, from bumbling jester to brazen jouster with hysterical aplomb. Scenes like “The pellet with the poison’s in the vessel with the pestle, the chalice from the palace has the brew that is true,” “Get it? Got it! Good,” and “To whom do I hum?” demonstrate why Life Magazine described his fans’ attitude as one of “worshipful hysteria.”