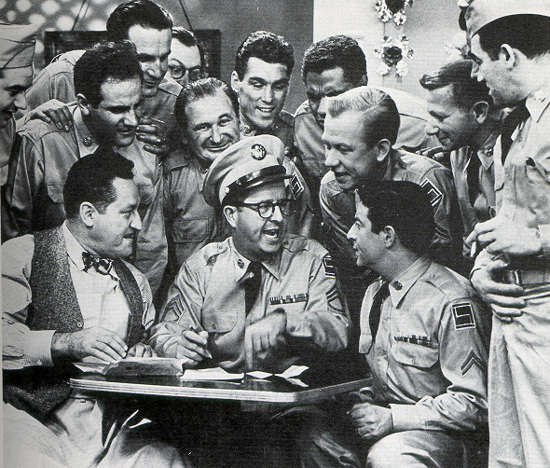 Both PHIL SILVERS (1911-1985) and his best-known character, Sergeant Bilko, were driven by a manic energy that sought to control, disrupt, and ultimately collapse all forces of linear, mathematical, or hierarchical order — reflecting the devout wish of the obsessive gambler. Silvers had a Royal Flush-level comedic virtuosity, while Bilko’s monomaniacal obsession with material self-advancement elegantly disemboweled the American Dream. So Silvers is an unacknowledged hero of ’50s counterculture: smart enough to slip his subversion into prime time, thus guiding his audience towards an increasingly skeptical view of authority while still enabling laughter at the hysterically heroic limits of rampant individualism.

On his or her birthday, HiLobrow irregularly pays tribute to one of our high-, low-, no-, or hilobrow heroes. Also born this date: Rosa Auslander, Martha Graham, Phil Silvers, Richard Feynman, Denver Pyle.