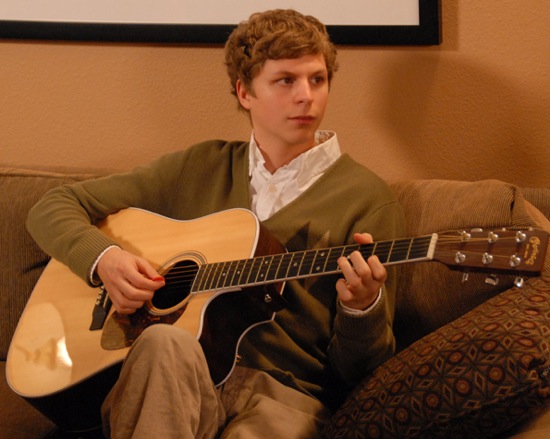 “I feel comfortable wearing clothes that don’t tell people ‘Hey, I’m gonna… be hip!'” Canadian actor MICHAEL CERA (born 1988) once told an interviewer. “Since I was 15 I’ve felt kinda like… an old man.” Perhaps this is the secret to Cera’s comedic persona: whatever Shia LaBeouf, Zac Efron, and other pseudo-cool extrusions from Disney’s youth-culture machine may be, he’s their opposite. Or maybe he was just in the right place at the right time: i.e., a teen actor born to make mockumentaries who showed up just as Ricky Gervais’ show The Office had changed everything. On Arrested Development (2003-06), he was a revelation as George Michael Bluth, the awkward soul of a dysfunctional family; and his own show, Clark and Michael, not to mention his performance as “Michael Cera” in Charlyne Yi’s Paper Heart, were brilliant. (Also check out the viral mockumentary bit “Knocked Up audition.”) Though Superbad and Juno are less compelling than these experiments, in them Cera movingly portrayed young men incapable of emotional dishonesty. About Year One we’ll say nothing.