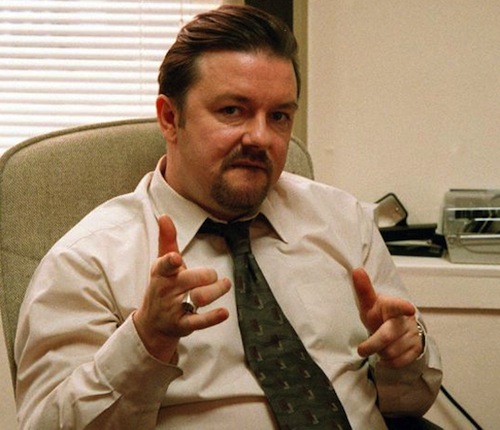 Long before RICKY GERVAIS (born 1961) sold paper in Slough in the guise of David Brent, Steve Coogan was taking those elements of his own personality that irritated him the most and magnifying them into high-definition, cringe-filled wankerhood. It is Alan Partridge, the deluded never-was, not David Brent, who first featured in a love-to-hate-him pseudo-reality monograph. But Brent is Partridge 2.0. As a character he is much richer and as a critique of middle Britain he is much harsher. Why? Ricky Gervais lived the life of a deluded day-job day-dreamer until his mid 30s and you can tell. Every time David Brent wiggles his tie knot, forces a smile and fires a volley of supercilious clichés at the person behind the camera, you feel you are learning about Gervais and the tit he used to be (and, for many, still is). Extras; the podcast he records with Stephen Merchant and Karl Pilkington; his stand-up show: all of these mark Gervais out as a highly competent comedy craftsman (let’s ignore his various forays into Hollywood). But when he reveals, through his characterizations in The Office, the traumatic effects of spending half a lifetime buried alive along with your aspirations in the drab concrete of an English megaburb, we realize that we are watching the prophet of the service industry age.