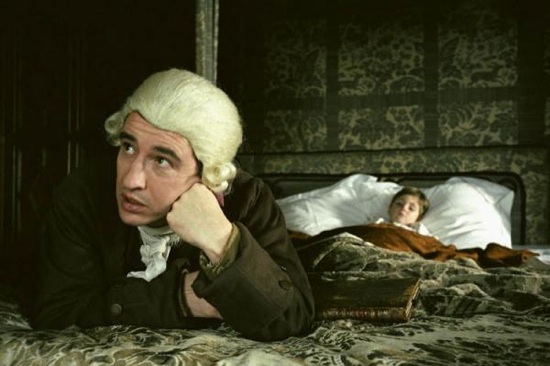 As the trickster-philosopher Tony Wilson in Michael Winterbottom’s 24 Hour Party People STEVE COOGAN (born 1965) was jaunty, vulnerable, inspired, and frequently full of shit. It was a part only he could have played. When thwarted or confronted in character, Coogan submits his face to a kind of G-force of moral pressure: the cheeks slacken, the eyes loll, the nostrils dilate terribly while the brain seems to bulge visibly with expiatory noise — excuses, confessions, pleas, whatever. And then he recovers, like a gymnast. Swaggers a little, even. In Winterbottom’s Tristram Shandy: A Cock and Bull Story, he was Laurence Sterne. To the marrow! That ponderously sensual mouth, suspended between a leer and a piety — that strutting pear-shaped body… Tristram Shandy was Sterne’s literary debut, and when it became a bestseller in 1760 the 47-year-old Yorkshire parson rushed down to London and abandoned himself to Society: there were salons, balls, meetings with Dr. Johnson (who apparently never forgave Sterne for showing him a dirty picture) and scandalous dalliances with a Mrs. Vesey, a Lady Percy, and a music-hall singer named Kitty de Fourmantelle. Coogan, too, has known erotic infamy: in 2005 his wife divorced him following tabloid reports of an evening spent amid two lapdancers (an episode referred to in Winterbottom’s film), and shortly thereafter — in what may be the ultimate Shandean misadventure — Courtney Love announced that she was carrying his baby. (Love has since withdrawn this claim). If Sterne’s bones had not been disinterred and stolen by eighteenth-century bodysnatchers, they would have been wriggling with glee in their grave.

On his or her birthday, HiLobrow irregularly pays tribute to one of our high-, low-, no-, or hilobrow heroes. Also born this date: | E. E. Cummings |