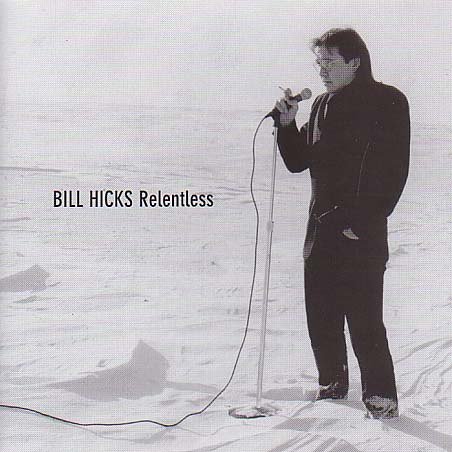 Of the many fascinating documents in Love All The People, a posthumous collection of letters, lyrics, and routines by the stand-up comic BILL HICKS (1961-94), two 1992 treatments for The Counts of the Netherworld, a TV talk-show pilot, are particularly revealing. Hicks casts himself and comic Fallon Woodland as aristocratic intellectuals at war with an unenlightened era — though diverted from their mission by sex, drugs, and rock’n’roll. Count William, a “misanthropic humanist,” describes the western word’s collective unconscious as a Netherworld; he urges Count Fallon, a “humanistic misanthrope,” to join him as an Agent of Evolution. Their milieu, into which they will invite authors, actors, dancers, and so forth, is a Victorian-era salon designed for creative collaboration, idle discussion, and laughter — and it’s “a refuge from the shrieking idiocy of our times.” Argonaut Folly! Hicks once described his stand-up act as “Chomsky with dick jokes.” Indeed, it veered from criticisms of society, politics, consumerism, pop culture, and religion (a no-no in the Eighties [1984-93]; in ’93, Letterman’s Late Show cut Hicks’ entire routine after taping, because of his anti-religious remarks) to Pryor-esque vulgarisms. Amazingly, The Counts of the Netherworld was approved and funded by Britain’s Channel 4. But before the pilot episode aired, and just as the Nineties that his sensibility had helped midwife were getting started, Hicks died of pancreatic cancer.

On his or her birthday, HiLobrow irregularly pays tribute to one of our high-, low-, no-, or hilobrow heroes. Also born this date: Philip K. Dick.