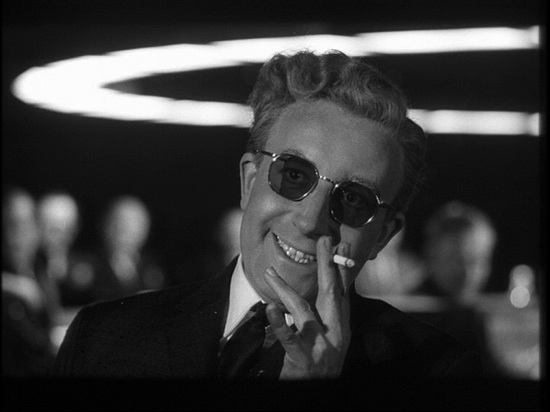 He was a violent husband (to four different wives) who managed his depression by consorting with an astrologer; and a drug-abusing freemason who dealt with his self-induced heart condition by consorting with a psychic healer. Yet PETER SELLERS (1925-80) gave us such touching and hilarious characters as Clouseau, the dimwitted flic who bumbles his way through the Pink Panther series; the simple-minded gardener, Chance, who gets catapulted to the top of the Washington social ladder in Being There; and the hapless Indian actor, Hrundi V. Bakshi, who klutzes his way through a glamorous Hollywood soiree in The Party. Sellers’s juggling of accents and identities reached its apotheosis in Dr. Strangelove, in which he embodied three different Cold War caricatures, each as plausibly ridiculous as the next. It is one the funniest scenes in this dark satire that feels uncannily symbolic of his inner turmoil: Sellers, playing Strangelove, the insane, wheelchair-bound scientist, jerks and tics his way Germanically through a Q&A with the American war machine. Meanwhile his hand, gloved in black leather, takes on a life of its own and tries to strangle him. This troubled, complicated man’s performances will forever be etched in the collective film-going consciousness.