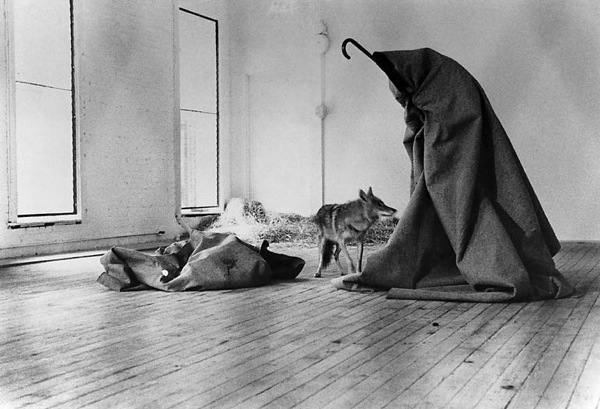 A conceptual artist, self-inventor, and master of materials who constructed his strongest work out of intangibles, JOSEPH BEUYS (1921-1986) was our postcard deity in art school. His sense of the absurd combined with his high seriousness in presentation made him the perfect icon both for those that wanted to take him seriously, and for those that had to mock him. And the great thing was, it made absolutely no difference: mocking the thing was the thing, it was both A and ~A at the same time. Not for nothing did Beuys choose to lock himself in a cage with a coyote, the trickster of myth, when he visited America, for pretty much no reason except to make a spectacle out of himself. A perfect commentary on the American Dream, which markets itself the world over as the ultimate Spectacle.

On his or her birthday, HiLobrow irregularly pays tribute to one of our high-, low-, no-, or hilobrow heroes. Also born this date: Philip Gordon Wylie, Tony Hancock
, Ian Dury,
Edward Lear, George Carlin.