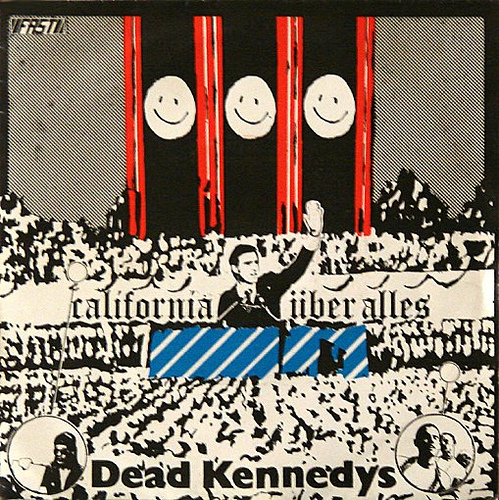 It’s never been easy to like Eric Reed Boucher, better known as JELLO BIAFRA (born 1958). In my New Jersey high school, the mainstream kids were offended the very idea of the Dead Kennedys, while the hardcore purists found them old hat. Jello himself — with his screeching voice, hatred of nostalgia, and holier-than-thou left politics — still seems like he’s defying you to embrace him. But embrace him I do: he saved my life. I vividly remember unfolding the cassette liner notes for Frankenchrist (1985) and learning I was not alone in my Reagan-era anger and despair. With lyrics like “Let kids learn communication/Instead of schools pushing competition/How about more art and theater instead of sports?… No one will do it for us/We’ll just have to fix ourselves/Honesty ain’t all that hard,” Jello knocked the scales from my teenaged eyes.

On his or her birthday, HiLobrow irregularly pays tribute to one of our high-, low-, no-, or hilobrow heroes. Also born this date: | Wally Wood |