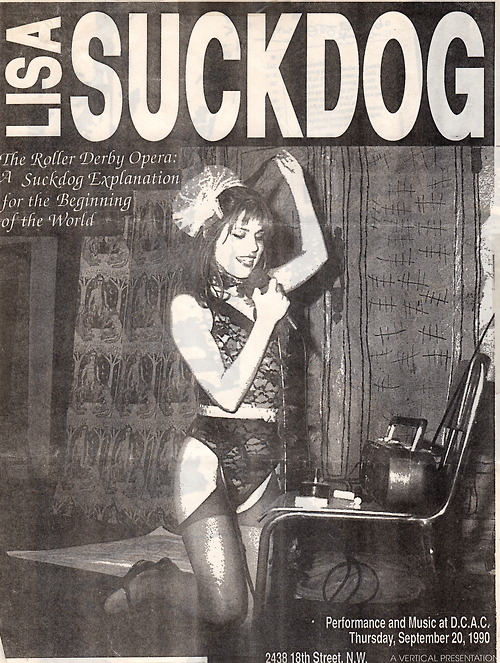 Had my twentysomething self been as honest about the events of my childhood as LISA CARVER (born 1968) has been about hers, instead of Mystery Date I might have published a zine like Carver’s Rollerderby. Born in Dover, New Hampshire, Carver was raised by her mother while her father spent most of her childhood in jail. As a teenager, she briefly worked as a prostitute — because, she claims, it was something she’d always wanted to do. Her band, Suckdog, was a sloppy noisefest — she preferred to call the project “a touring operatic troupe” — and provided a live soundtrack to confrontational performances filled with nudity, blood, and rape scenarios, themes that found their way into the pages of her zine. I was appalled by Rollerderby, but I also instinctively understood her work’s amalgam of bodily fluids. (Was my hidden history of cutting and self-injury any different from what Carver did in public — other than that she was brave and I was a coward?) Frankly, Carver terrified me. This, after all, was a woman who went on a date with the legendary scatologist GG Allin. Luckily for looky-loo shrinking violets like me, she wrote about it all — first in Rollerderby, then in her books Dancing Queen and Drugs Are Nice: A Post-Punk Memoir. Her writing is by turns sexy, funny, truly disturbing — and always riveting. To repurpose her own words about dream-date Allin: “Lisa Carver is real.”

On his or her birthday, HiLobrow irregularly pays tribute to one of our high-, low-, no-, or hilobrow heroes. Also born this date: Hedy Lamarr, Ti-Grace Atkinson.