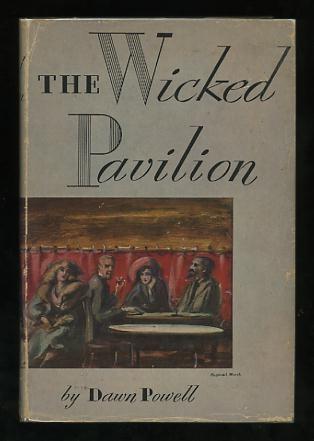 According to DAWN POWELL (1897-1965), there was no trick to writing satire. You just describe people as they are, and add a motive. If you substitute vision for motive, then what you get is romance. Either one is fine, she maintained, and “truer than the middle course of ‘realism.'” Though Powell was inevitably compared to Dorothy Parker (whose work she did not admire but with whom she did not mind having a few drinks), her writing is less concerned with romantic disappointment and more with doing damage on its own. “True wit,” she wrote, should “strike at the exact point of weakness and it should scar.” Powell wrote hard, was disgusted by how very little money she earned, married an advertising man and raised an autistic son. She “pigged on cocktails” with Ogden Nash, and plucked from louche Manhattanites the ambitions and failings — and, of course, motives — that she brushed to a gleaming, crazed radiance, keeping an eye on those who exited the Wicked Pavilion, how on the street it was obvious that their “café egos” had shrunk to pocket size, that they were once again yoked by family or bent to fit a subway entrance.