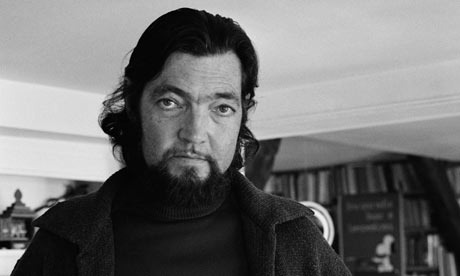 When he was nine years old, Argentine JULIO CORTÁZAR (1914–84) defied his mother and read Edgar Allan Poe. The experience made him a nervous wreck for three months and inspired him to be an author. Literature was Cortázar’s game, for which he rewrote the rules in the 155 nonlinear chapters of his 1963 novel Hopscotch. He wrote the book from the middle out, at the midpoint of his life, while working as a translator for UNESCO in Paris — a move triggered by his imprisonment in Argentina for protesting the Perón government. As military regimes intensified throughout Latin America, liberation and resistance, especially that of Sandinista Nicaragua, became the main themes of Cortázar’s fiction and essays. With the Russell War Tribunal, founded by Bertrand Russell and Jean-Paul Sartre, he investigated human rights abuses in Latin America and donated royalties to Sandinistas and families of political prisoners. Critics complained that his writing became less supple; he countered that the baroque, though beloved in Latin America, was too easy. “I don’t like turgid, voluminous sentences… purring and purring into the reader’s ear,” he said.

On his or her birthday, HiLobrow irregularly pays tribute to one of our high-, low-, no-, or hilobrow heroes. Also born this date: Barbara Ehrenreich and Peggy Guggenheim.