I’ve been digging Mike Watt’s new opera, the underlying message of which is (he says) “about at this time in life maybe you wanna think of your own reason why things are what they seem to be or whatever,” and also “life is for learning.”

I get the same exegetical pleasure from listening to Hyphenated-Man (out on Watt’s own Clenchedwrench label) while studying Hieronymus Bosch’s The Garden of Earthly Delights and other paintings that I do from reading Gary Panter’s Jimbo’s Inferno. Punk is dead; long live punk.

Much later, while touring in 2005 as the bassist for the re-formed Stooges, he visited the Prado in Madrid and saw some of the paintings up close. He said they reminded him of his childhood and his current state. (“Those little characters are fears, or hopes,” he said.) And they connected with another part of his life too. Like Bosch, who made big paintings out of little figures, the Minutemen had made a couple of large records out of “little songs with no filler,” as Mr. Watt put it, including the 1984 double album “Double Nickels on the Dime.” He started to realize that he could make a Bosch-like record and a Minutemen-like record at the same time. 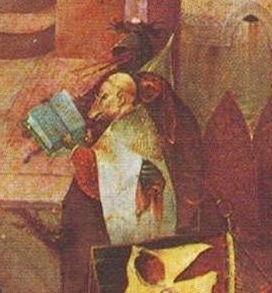 My favorite Hyphenated-Man song at the moment is “Mockery-Robed-Man.” Which is based on a character or characters from Bosch’s The Temptation of St. Anthony. I dig it so much not just because of its ambivalent and erudite take on irony (irony without mockery: good), which is one of our central themes here at HILOBROW, but also for the chop-wood-carry-water mantra at the end. I’ve never been interested in chopping wood or carrying water, but kayaking and bicycling and playing music sounds like exactly the mindful practice for me.

About Josh, Most Visited, Punk, Read-outs