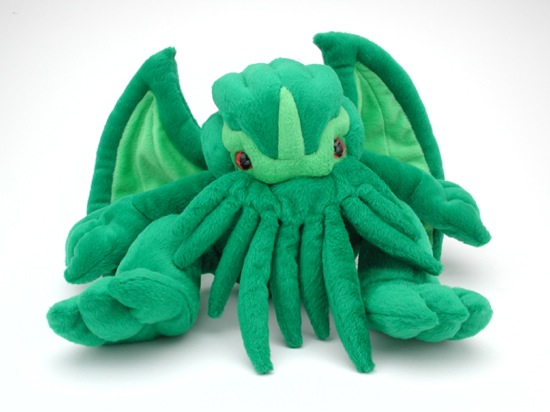 The final paragraph of H.P. Lovecraft and August Derleth’s The Lurker at the Threshold (1945) describes an uncanny scene that nicely limns the Cthulhu Mythos for those of us who may as yet be unfamiliar with it. Winfield Phillips, the formerly skeptical assistant to Seneca Lapham, an occult detective in the mold of Sheridan Le Fanu’s Martin Hesselius (and professor of anthropology at Miskatonic University in Arkham, Massachusetts), recounts catching a horrifying glimpse of

great globes of light massing towards the [trans-dimensional] opening, and not alone these, but the breaking apart of the nearest globes, and the protoplasmic flesh that flowed blackly outward to join together and form that eldritch, hideous horror from outer space, that spawn of the blankness of primal time, that tentacled amorphous monster which was the lurker at the threshold, whose mask was as a congeries of iridescent globes, the noxious Yog-Sothoth, who froths as primal slime in nuclear chaos forever beyond the nethermost outposts of space and time!

Middlebrow, which forever seeks to transform the unheimlich into the gemütlich, might seem to have met its match in the nobrow/hilobrow Cthulhu Mythos. However, as HiLobrow.com’s readers well know, today it’s possible to collect an entire line of cuddly Cthulhu toys, not merely via specialty retailers but via Amazon; follow a web comic in which Lovecraft’s Great Old Ones (including Cthulhu, Nyarlathotep, and Yog-Sothoth) attempt to lead normal lives; watch the animated Adventures of Li’l Cthulhu; and assemble a Lego kit in which pirates are menaced by The Unspeakable, He Who is Not to be Named, Lord of Interstellar Spaces: Hastur! To name just a few examples of quatsch Cthulhu products.

Seneca Lapham might be a bold detective of the unheimlich; here at HILOBROW, we’re equally fearless investigators of the gemütlich. How did this happen? By what stages did the Cthulhu Mythos, and all that it represents (e.g., forbidden knowledge, non-human influences on humanity, Fortean science) become so… cute? Whence came Li’l Cthulhu?

Here are a couple of early iterations that spring to mind. Please suggest others!

1. Gahan Wilson’s cartoons, in the Sixties and Seventies, for quatsch periodicals like Playboy and The New Yorker. Here we find human-nullifying entities from outer space and other dimensions intruding upon pedestrian reality, not to mention the survival of ancient evil into contemporary times, played for laughs. 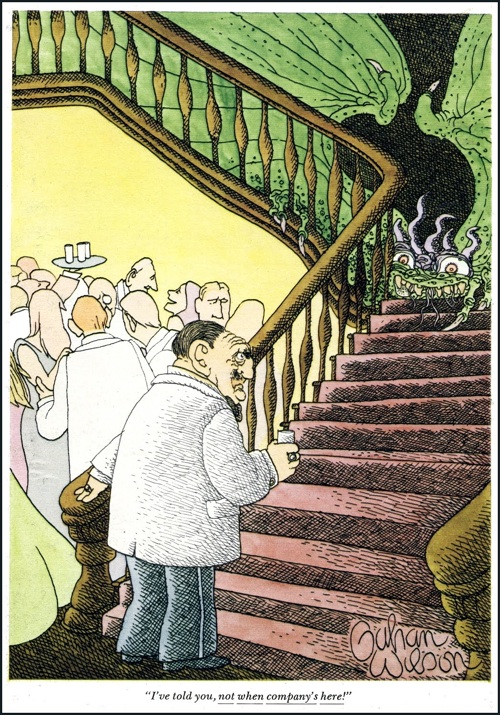 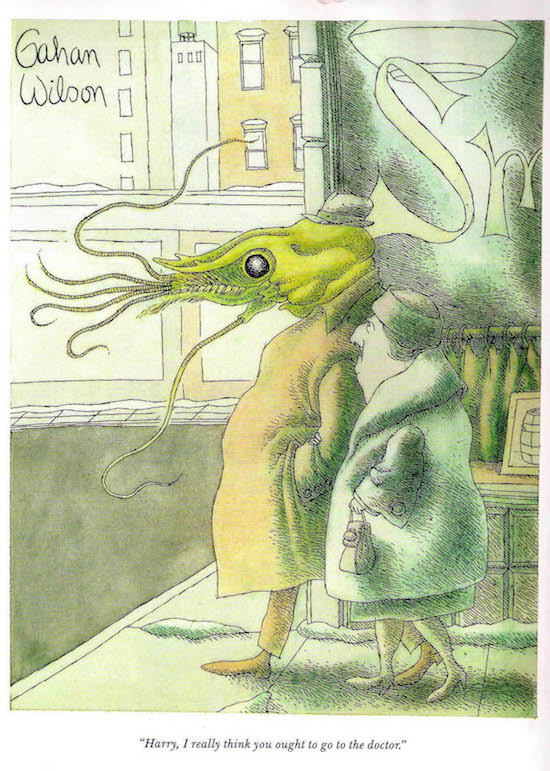 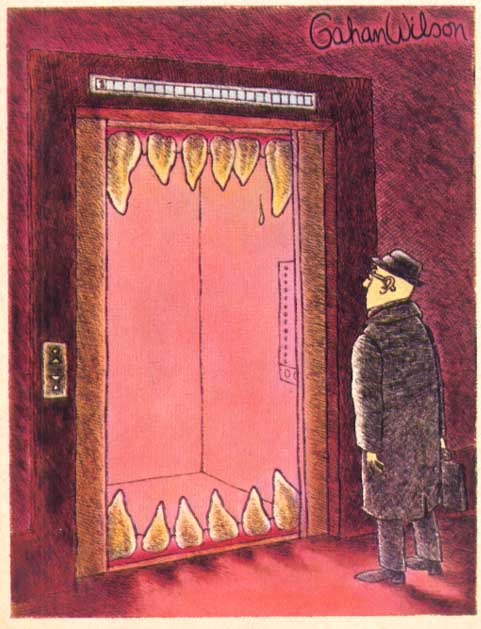 2. The exaggerated advertisements and packaging — originally drawn by Joe Orlando (of MAD, which adds to our theory that MAD was more quatsch than it was nobrow) — for the product Sea-Monkeys. 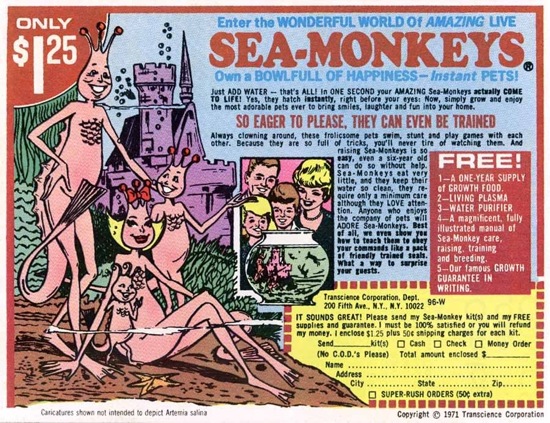 3. Perhaps the earliest example of the quatschification of the Cthulhu Mythos is the nightmare sequence in Jean de Brunhoff’s Le Roi Babar, published in 1933, near the end of Lovecraft’s writing career. 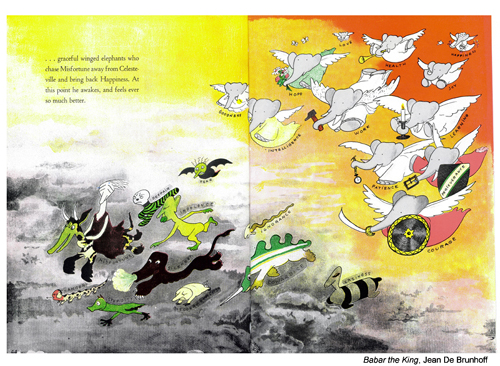 Despite the cuteness of the monsters depicted here by Brunhoff, we’re obviously looking at Lovecraft’s Great Old Ones. That striped creature at bottom right: isn’t it a cute version of Gloon, the gigantic wattled slug-thing from Lovecraft’s 1925 story, “The Temple”? The adorable red-faced horror scuttling ahead of the rest of the pack — surely it’s a miniature-scale Bokrug (gigantic water lizard) from Lovecraft’s “The Doom that Came to Sarnath” (1920). And look closely: near the center of Brunhoff’s spread, we find a bat-winged humanoid whose head sprouts tentacular growths. I hereby declare this the first sighting of Li’l Cthulhu!

Of course, Lovecraft was a great collaborater and borrower; he lifted the Great Old One Tsathoggua, for example, from his friend Clark Ashton Smith’s story “The Tale of Satampra Zeiros.” So his influence on Brunhoff, whose first Babar book appeared in 1931 (in French; in English, in 1933), might have gone both ways: after all, in Lovecraft’s 1933 story, “The Horror in the Museum,” we read of Chaugnar Faugn, a Great Old One that takes the form of… a bipedal elephant.

Thanks to Peggy Nelson, John Holbo, and others who contributed to this report. If you can think of other precursors to today’s quatsch Cthulhu meme, let us know!

Fourth in an occasional series.