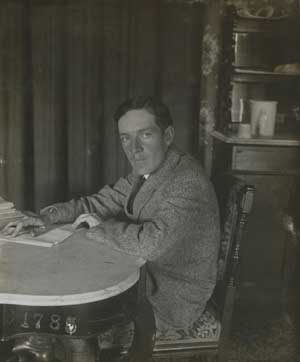 In 1906, UPTON SINCLAIR (1878-1968) published The Jungle, a bestselling fictional exposé that used Chicago’s meatpacking industry as a stage upon which to dramatize the suffering visited upon laborers by unregulated capitalism. Though Congress swiftly passed the Pure Food and Drug Act, Sinclair’s twenty-fourth novel had zero effect upon its intended target. (“So long as we have wage slavery,” laments one character, “it matters not in the least how debasing and repulsive a task may be, it is easy to find people to perform it.”) Sinclair, who griped that “I aimed at the public’s heart, and by accident I hit it in the stomach,” used his new wealth to establish a utopian colony (Helicon) in Englewood, N.J, before going on to churn out sixty-five more titles in various genres. It must be acknowledged that Sinclair was a mediocre novelist. We’ve included him in our pantheon because he participated in two Argonaut Follies: Helicon, which soon burned down; and the Forte Circle (1910-15), an international cabal of activist intellectuals — including Martin Buber and Gustav Landauer — who attempted to prevent WWI. However, certain of his books are worth the effort: The Brass Check (1919), a still-pertinent criticism of “objective” journalism; The Millennium (1924), a Radium Age sci-fi play; Oil! (1927), the novel on which Paul Thomas Anderson’s There Will Be Blood was loosely based; and Boston (1928), a “documentary novel” about Sacco and Vanzetti. Co-Op (1936), a “novel of living together,” also sounds promising.

On his or her birthday, HiLobrow irregularly pays tribute to one of our high-, low-, no-, or hilobrow heroes. Also born this date: Jay Ward and Stevie Smith.

READ MORE about members of the Psychonaut generation (1874-83).