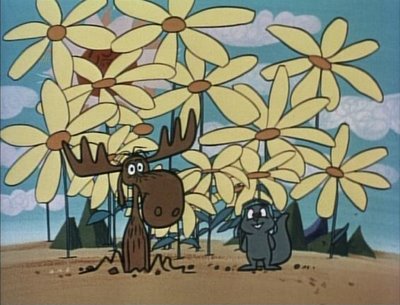 We at HILOBROW are all alumni of JAY WARD’s (1920-89) Wossamatta U. After being well versed in the lowest form of humor, matriculates may choose from such intriguing course offerings as: Dim Canadian Gallantry, or Leading with your Jaw; Tune in Next Week, or Milking the Serial; and Rapunzel is Broken, or Bruno J. Bettelheim Can Bite My Moose. Certainly some of the papers out of Wossamatta have been controversial (“Squirrel and Moose: Come Back To the Raft, Rocky Honey”) but Prof. Ward’s work erases the entirely imaginary distinction between advertising and media commentary. “Watch me pull a career out of my hat that converts Cold War paranoia into slapstick, undermines fustian history, and creates a generation of skeptical wisenheimers.” “But that trick never works.” “This time for sure!”

On his or her birthday, HiLobrow irregularly pays tribute to one of our high-, low-, no-, or hilobrow heroes. Also born this date: | Stevie Smith | Upton Sinclair |