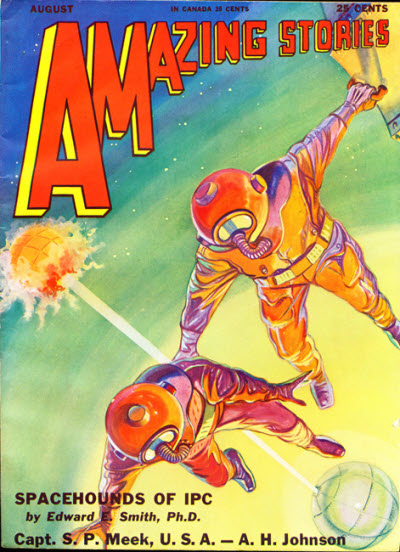 This stand-alone novel — unconnected to the author’s more famous Skylark and Lensman series — is a Robinsonade set mostly on Ganymede, one of Jupiter’s moons. Dr. Percival Stevens, a brilliant scientist, is traveling to Mars aboard the Inter-Planetary Corporation’s liner IPV Arcturus, when it is attacked — by pirates? — and cut into pieces. Commandeering one of the liner sections, Stevens and Nadia, a beautiful passenger, crash-land on Ganymede and begin building an ultra-radio — in order to call for help. Fleeing Ganymede’s native inhabitants, the castaways head back into space, only to be attacked again. They are rescued by explorers from Titan, one of Saturn’s moons. And a lot of other stuff happens — it’s a space opera, after all.

Fun facts: Published in the August through September 1931 issues of Amazing; the first story to ever use the sci-fi term “tractor beam.” This was Smith’s own favorite novel, which he described as “really scientific fiction; not, like the Skylarks, pseudo-science.”