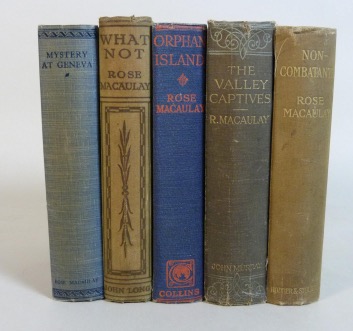 At some point after the Great War [that is to say, after the First World War, which ended a few months after Macaulay wrote this book], in a Britain where people travel by underground train and “street aero,” a government ministry — the Ministry of Brains — decides to increase national brain-power, and stave off the coming idiocracy, through a program of compulsory selective breeding. The propaganda efforts in support of this endeavor are amazing, and wide-reaching… not just official posters, but newspaper editorials, business advertisements, contests, and more. However, when it’s discovered that the head of the Ministry has secretly married, even though — because there is “deficiency” in his family — he is not allowed to do so, the Ministry is burned down. The book ends on an ambiguous note: Is the victory of “human perverseness, human stupidity, human self-will” over autocratic bureaucracy a triumph? Or not?

Fun fact: When British censors discovered that What Not ridiculed wartime bureaucracy, its planned 1918 publication was stopped. Macaulay is best known, today, for her award-winning final novel, The Towers of Trebizond (1956).