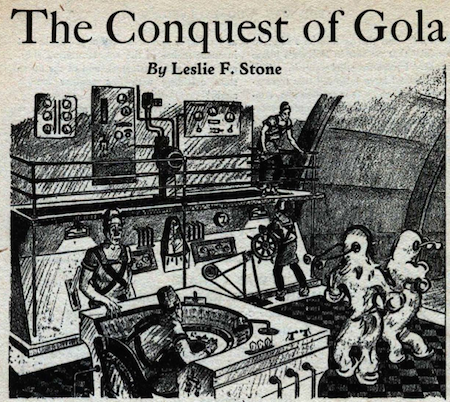 When men from Earth invade Gola (Venus), the planet’s superioristic, Amazonian females — who keep their own passive males as mere houseboys and playthings — fight them off with contemptuous ease, deploying advanced military tech (including laser weapons) and psychological tactics. Narrated by a Golan, the story takes men — and humans, generally speaking — down a peg or two, by viewing them (us) from the perspective of a higher life-form, a non-humanoid alien with attitude. Why are human bodies so inefficient — their organs restricted by function and location? Why do the females of Earth send their hapless males to explore, negotiate, and invade?

Fun facts: Stone was one of a very few female authors in sci-fi publisher Hugo Gernsback’s inner circle. The story was serialized in the April 1931 issue of Wonder Stories; reprinted in Groff Conklin’s The Best of Science Fiction in 1946.