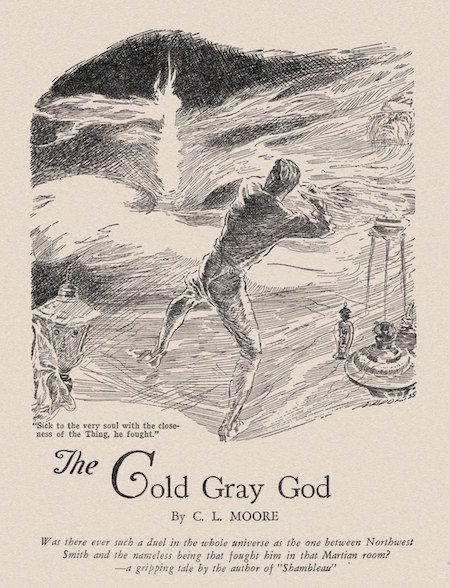 In the far future, humankind has colonized the solar system. The ruthless, cynical spaceship pilot and smuggler Northwest Smith roams from planet to planet, looking to make a quick buck. In “Shambleau” (November 1933), for example, Smith rescues a strange, beautiful girl from a Martian mob; and in “Black Thirst” (April 1934), he ventures into a forbidden Venusian fortress. And in “Dust of Gods” (August 1934), Smith and his Venusian comrade, Yarol, take a job searching for the physical remnants of a dead god. In many of these yarns, all of which appeared in Weird Tales — during that magazine’s H.P. Lovecraft/Robert E. Howard/Clark Ashton Smith era — Smith undergoes outré psychological/spiritual trials, which take place in extra-dimensional or dream-like contexts.

Fun fact: Catherine Lucille Moore was among the first women to write pulp science fiction and fantasy. She and her first husband, Henry Kuttner, were prolific co-authors.