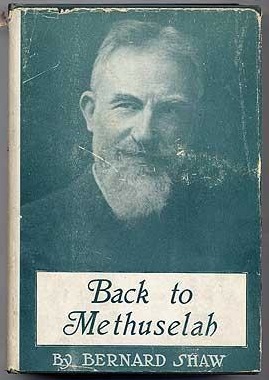 George Bernard Shaw’s Back to Methuselah: A Metabiological Pentateuch (1921).

Shortly after WWI, the secret of Creative Evolution — in Shaw’s formulation, the process by which an organism can will its own entelechy, or self-potentiation — is discovered. By the year 3100 the long-lived elite have developed perfect physiques and advanced mentalities. Zozim and Zoo are Boomer-like superhumans (he’s nearly 100, she’s 50, but they act like young adults) who assist a sham oracle in overawing the short-livers seeking its advice. It’s all part of a plot to colonize and supersede ordinary humans! But like the proto-Yippies they are, Z and Z are upfront about the put-on. Zoo: “[Zozim] has to dress-up in a Druid’s robe, and put on a wig and a long false beard, to impress you silly people…. I have no patience with such mummery; but you expect it from us; so I suppose it must be kept up.” It’s Wild in the Streets meets Highlander.

Fun fact: Fun fact: RFK was quoting this Radium Age sci-fi play when he said, “‘You see things; and you say, “Why?” But I dream things that never were; and I say, “Why not?”.’”