Having learned how to visit other worlds telepathically, Dr. Kinney and his companions enter the minds and share the sensations of the inhabitants of Hafen [Heaven], a planet inhabited by capitalists, and Holl [Hell], its twin planet, which is inhabited by workers. Not content merely to study the goings-on, Kinney & co. help the workers’ revolutionary party stop the Hafenites from invading a third planet Alma, which is inhabited by “‘cooperative democrats’; that is, they do not compete with each other for a living, but work together in all things, in complete equality.” Unfortunately, a Hafenite WMD separates the twin planets. This is the third occult-science-fiction Dr. Kinney story; the others are “The Lord of Death” (June 1919), “The Queen of Life” (August 1919), and “The Emancipatrix” (September 1921).

Fun facts: Originally serialized in Argosy All-Story Weekly (July 1921); also serialized here at HILOBROW by HiLoBooks. Everett Bleiler’s Science Fiction: The Early Years calls Flint “in many ways the outstanding writer of s-f in the Munsey pulp magazines.” Flint died in a crash near Oakland, Calif., after supposedly stealing a taxi at gunpoint in order to use it in a bank hold-up. In 1965, Ace published The Devolutionist and The Emancipatrix together; could The Devolutionist and The Emancipatrix possibly be the best sci-fi title ever? 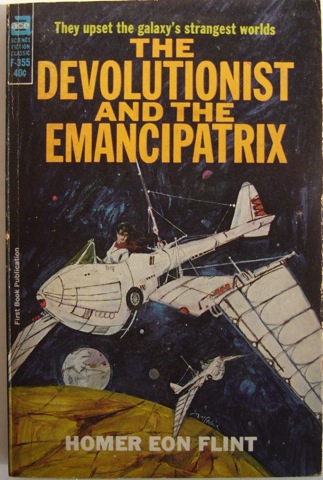