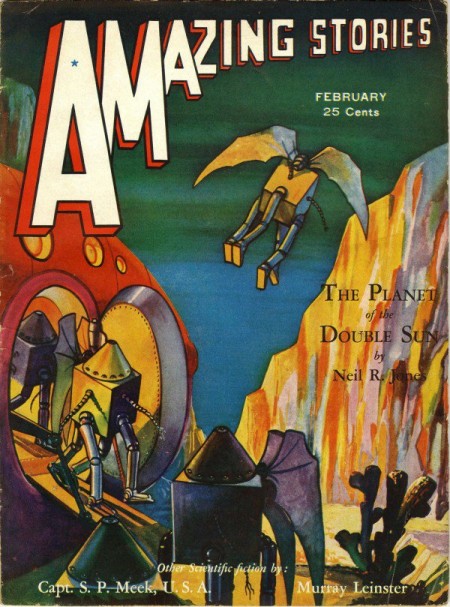 In 1958, Professor Jameson arranges for his body to be cryopreserved — in a rocket orbiting the Earth — after he’s dead. Forty million years later, a crew hailing from the planet Zor, whose inhabitants had “built their own mechanical bodies, and by operation upon one another had removed their brains to the metal heads from which they directed the functions and movements of their inorganic anatomies,” discover the satellite. The Zoromes transfer Jameson’s brain into a machine body, then take him to visit the lifeless Earth, an experience that nearly drives him mad, until he realizes that “He could be immortal if he wished! It would be an immortality of never-ending adventures in the vast, endless Universe among the galaxy of stars and planets.” Indeed, Jones would publish 21 more Professor Jameson stories. Are they well-written? Not particularly. However, Jones’s stories were popular at the time, and their cyborg conceit is a terrific one.

Fun fact: The first story in the series is “The Jameson Satellite” (Amazing Stories, July 1931). Isaac Asimov claimed the Zoromes, who although technically cyborgs are robot-like in their thorough-going objectivity, gave him his “feeling for benevolent robots who could serve man with decency.” Jones is also credited with inspiring the modern idea of cryonics.