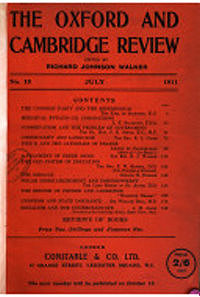 Written as a riposte to H.G. Wells’s 1899 technocratic utopia When the Sleeper Wakes, in which Londoners live in a multi-tiered underground society, connected by a vast rail network, Forster’s short novella The Machine Stops takes place in a future civilization in which the outdoors is all but uninhabited. A “Machine” supplies each inhabitant of this global civilization with everything he or she might desire — to a degree where, at this point, few people ever leave their well-appointed apartments. Socialization and entertainment are entirely mediated via the Machine: yes, Forster helped predict the Internet. Who programs the Machine? It’s unclear. In fact, most people are programmed by the Machine. When one courageous individual, Kuno, briefly visits the outside world, he’s shunned by his own mother. Later, when the Machine begins to break down, the inhabitants of this utopian society are utterly helpless.

Fun fact: This story was published between the author’s much more famous works A Room With A View and Howards End, the latter of which also warns against machine-based society. Serialized here at HILOBROW.