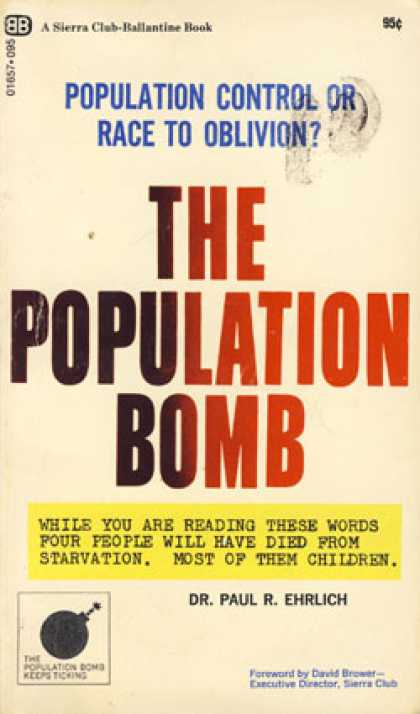 PAUL EHRLICH (born 1932) wrote sophisticated horror narratives cleverly disguised as a serious manifesto about ecology. Known for his immensely successful 1968 book, The Population Bomb, the Stanford biologist became a celebrated commentator on the relationship between humans and the planet. Lost through his transfiguration into an environmental icon is the irreducible weirdness of his work. Bomb was a mélange of serious population dynamics research, wonky policy talk, a zero population growth manifesto, nuclear terror, and very strange fictional vignettes. “Freddy was happy behind the plow. The mule was strong, and the work was going well,” one scenario goes. “Only in some parts of the southeast had survival been possible and he’d been one of the lucky ones.” The writing is clunky but the plotting is plodding, but the plot lines are grisly enough to hold our attention. In Ehrlich’s own estimation, the happiest of his three scenarios “presumes the death by starvation of as many as a billion people” and he “challenged” his readers to “to create one more optimistic.” His prescription for the globe was to impose population growth restrictions by any means necessary. The good news is that humans didn’t need the Ehrlich cure. Few of his policies were enacted and he turned out to be spectacularly wrong on just about every count but one: human beings probably are irreversibly damaging the planet. But it will be slow and long and there will be billions happily living through it all. The apocalypse he imagined was bright and spectacular like a missile strike. The ones that seem likely to arrive will be as invisible as carbon dioxide and as boring as an Excel Spreadsheet of oil field depletion rates.