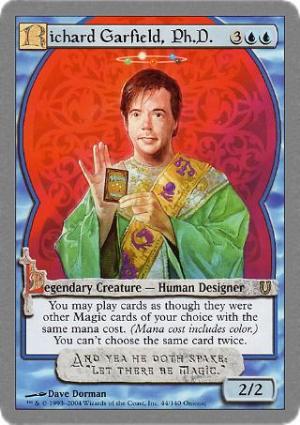 Mathematics, with all its insights into hidden dimensions and worlds impossible or unseen, can appear a lot like magic to the mere mortal, and the purveyors of the dark arts of numbers a bit like wizards. RICHARD GARFIELD (born 1963) combined math and magic with a tincture of luck to create Magic: The Gathering, a card game played by 6 million people across the world. In 1993, The University of Pennsylvania doctorate holder teamed with a tiny company, Wizards of the Coast, to unleash a game as creative as it was retrograde. In the burgeoning digital age, it was a game made of paper — a trading card game that smelled like Dungeons & Dragons, no less. Released two years before Bowling Alone, Robert Putnam’s landmark sociological essay about America’s disintegrating civic sphere, the game depended on exactly the kinds of local, loose, in-person social networks that Putnam argued were disappearing. In my tiny hometown, every kind of dirty-haired townie would cluster around old poker tables at the hobby shop, one of the few businesses left. The game’s difficulty curve, which sloped gently upward forever, sucked in computer nerds (the real, DOS kind) and athletes alike. Luck and skill were gorgeously balanced so that upsets were common, but real strategy was necessary. Garfield’s genius wasn’t just in the design of the original game but nursing an entire community to life. Even the consumer experience of buying a pack was part of the game; the pricing allowed everyone to have a shot at an amazing deck of cards to play. From nerdy middle schoolers in Ridgfield, Washington to professionals who traveled the world for high-stakes tournaments, Garfield knew who his people were, and remained a tireless defender of the sanctity of the game, even after the game’s revenues broke $100 million in the mid-90s.

Richard Garfield was born on the cusp of the Original Generation X (1954–1963) and the Reconstructionist Generation (1964–1973). READ MORE about cuspers.