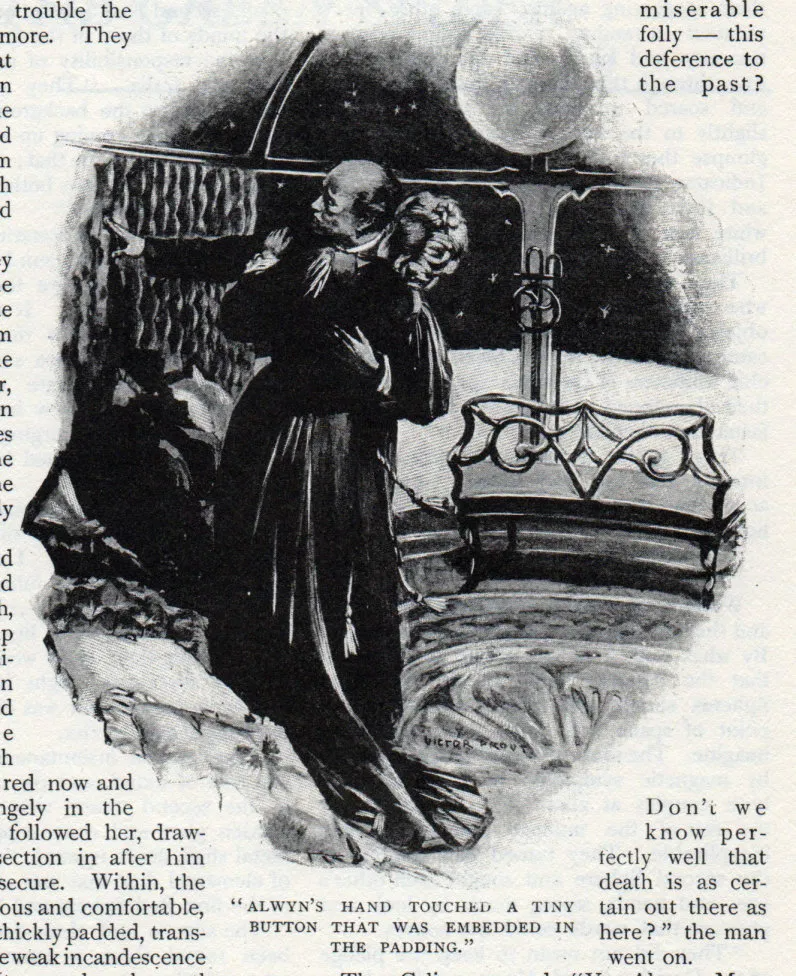 So the hour passed. They switched the electric current into the framework of the vehicle that was to bear them into space. All the radiators ceased to glow and all the lights went out, leaving them, in that lower room, in absolute darkness and intense cold. They sat huddled together against the wall, where they could feel the thrill of the humming dynamos, embracing each other, silent and resolute; waiting for the end of the cold hour. They could find few words to speak now, but their thoughts were the busier.

They thought of the glorious, yet now futile past, with all its promises shattered, its ideals valueless, its hopes unfulfilled; and seemed to feel in themselves the concentration and culmination of the woes and fears of the ages. They saw, as in one long vista, the history of the millions of vanished years — “from earth’s nebulous origin to its final ruin”; from its days of four hours to its days of twenty-six and a half; from its germinating specks of primal protoplasm to its last and greatest, and yet most evil creature, Man. They saw, in mental perspective, the uneven periods of human progress; the long stages of advance and retrogression, of failure and success. They saw the whole long struggle between the tendencies of Egoism and Altruism, and knew how these had merged at last into an automatic equilibration of Duty and Desire. They saw the climax of this equilibration, the Millennium of Man — and they knew how the inevitable decay had followed.

They saw how the knowledge of the sureness and nature of life’s end had come to Man; slowly at first, and not influencing him much, but gaining ever more and more power as the time grew nearer and sympathy and intellect more far-sighted and acute; how, when the cold itself began, and the temperate zone grew frigid, and the tropic temperate, and Man was compelled to migrate, and his sources of heat and power failed one after the other, the knowledge of the end reacted on all forms of mental activity, throwing all thought and invention into one groove. They saw the whole course of the long fight; the ebb and flow of the struggle against the cold, in which, after each long period, it was seen that Man was the loser; how men, armed with powers that to their ancestors would have made them seem as gods, had migrated to the other planets of the system, only to find that there, even on Mercury himself, the dying sun had made all life a fore-known lost battle; how many men, whole nations, had sought a premature refuge from the Fear in the Ultimate Silence called Death. They saw how all the old beliefs, down to the tiniest shreds of mysticism, had fallen from Man as a worn-out garment, leaving him spiritually naked to face the terrors of a relentless Cosmos: how, in the slow dissolving of the ideal Future, man’s duties and thoughts were once more moulded with awe and reverence to the wishes of the Past.

They saw the closing centuries of the struggle; the discovery of the Red Metal; the building of the Spheres that none dare venture to use, but which each succeeding and lessening generation handed down to the next as a sacred heritage only to be put to test in the last resort; they remembered, in their own childhood, the Conference of the Decision, when they two had been chosen, as the only pair of sufficient vigour and health and animal courage to accept the dread legacy and dare the dread adventure of seeking a fresh home in the outer vastness, so that haply the days of Man might not be ended; and they remembered, only too well, how the rest of humanity, retiring to their last few houses, had one and all pledged each other to seek the Silence and trouble the chilly earth no more. They knew how well that pledge had been kept, and in the darkness and silence of the room clutched each other closer and closer.

And at last they heard the Time Indicator in the uppermost room ring the peal of the completed hour, and knew that in their own lives they must act the final scene in the long life-tragedy of the earth.

Alwyn’s hand reached out and touched the switch, and the glow-lamp sprang into radiance again. In silence he handed Celia into the Sphere — which shone a deeper red now and coruscated strangely in the light — and then followed her, drawing the screw section in after him and making it secure. Within, the Sphere was spacious and comfortable, and, save where thickly padded, transparent, even to the weak incandescence of the lamp. It was also pleasantly warm, for the Red Metal was impervious to heat. The man’s hand went to the lever that worked through the shell, and pushed aside the strong jaws of the spring clamp that held the Sphere down; and as it went, he looked into the woman’s eyes. He hesitated. There was a light in her eyes and his, a feeling in her heart and his, that neither had seen nor experienced before.

“It’s madness, Celia,” he said, slowly. “It’s not too late yet. The moment I pull this lever over the Sphere will tear its way up through the building like an air-bubble through water, but until then it is not too late.”

This was not a question in phrase, but it was in fact. Celia did not answer.

“Isn’t it a miserable folly — this deference to the past? Don’t we know perfectly well that death is as certain out there as here?” the man went on.