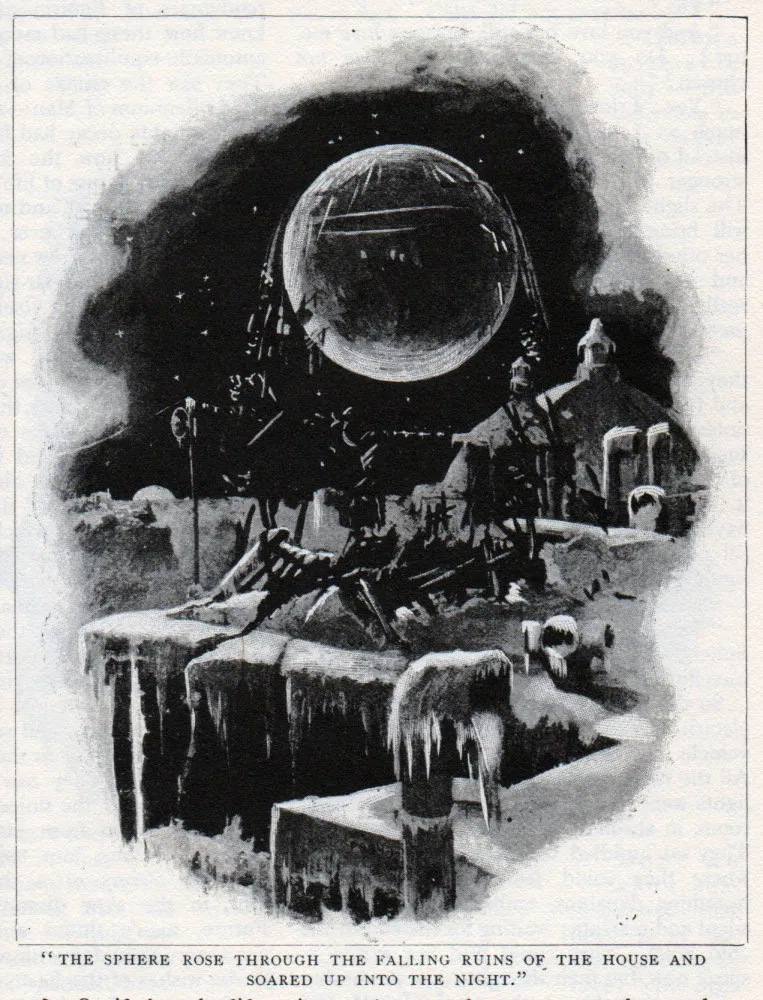 The Red Sphere was made of a manufactured element, unknown except within the last million years, and so costly and troublesome to produce that only two Red Spheres had ever been built. It had been made 500 years before Alwyn and Celia were born. It was made for the purpose of affording the chosen survivors of humanity a means of escaping from the earth when the chemical power proved incapable of resisting the increasing cold. In the Red Sphere Alwyn and Celia intended to leave the earth, to plunge into space — not to seek warmth and light on any other member of the Solar System, for that would be useless — but to gain the neighbourhood of some yet young and fiery star. It was a terrible undertaking — as much more terrible than mere interplanetary voyages as the attempt of a savage to cross the Atlantic in his dugout after having learned to navigate his own narrow creek. It had been left undared until the last, when, however slight the chance of life in it, the earth could only offer instead the choice of soon and certain death.

“It appears just as it did the day I first saw it and was told its purpose,” said Celia, with a shudder she could not repress. “Are you sure, Alwyn, that it will carry us safely? — that you can follow out the Instructions?”

For generations the Red Sphere and all appertaining to it had been mentioned with a certain degree of awe.

“Don’t trouble yourself on that point. The Instructions are simple. The necessary apparatus, and the ten years’ supply of imperishable nutriment, are already inside and fixed. We have only to subject the Red Metal to our 6,000 volt current for an hour, get inside, screw up the inlet, and cut ourselves adrift. The Red Metal, thus electrified, becomes, as you know, repulsive to gravitation, and will so continue for a year and a half. By that time, as we shall travel, according to calculation, at twice the speed of light, we should be more than half-way to one of the nearer stars, and so become subject to its gravitation. With the earth in its present position, if we start in a couple of hours, we should make F. 188, mag. 2, of the third order of spectra. Our sun, according to the records, belonged to the same order. And we know that it has at least two planets.”

“But if we fall right into F. 188, instead of just missing it, as we hope? Or if we miss, but so closely as to be fused by its heat? Or if we miss it too widely and are thrown back into space on a parabolic or hyperbolic orbit? Or if we should manage the happy medium and find there be no life, nor any chance of life, upon the planets of that system? Or if there be life, but it be hostile to us?”

“Those are the inevitable dangers of our plunge, Celia. The balance of probabilities is in favour of either the first or second of those things befalling us. But that is not the same as absolute certainty, and the improbable may happen.”

“Quite so, Alwyn; but — do you recollect if the Instructions make any reference to these possibilities?”

“To—? Yes. There is enough fulminate of sterarium packed in the Sphere to shiver it and us to fine dust in the thousandth part of a second — if we wish. We shall always have that resource. Now I’ll attach the dynamo leads to the Sphere. Get your little items of personal property together, and we shall be ready.”

Celia went up the lift again, and Alwyn, after fixing the connections to several small switches on the surface of the Sphere, followed her. They sat together in the darkening twilight of the dim room above, waiting for the first hour to pass. They spoke at intervals, and in fragmentary phrases.

“It will be cold while the Sphere is being prepared,” said Alwyn.

“Yes, but we shall be together, dear, as we have been so long now. I remember how miserable I felt when I first knew my destiny; but when I learned that you were chosen to share it with me, I was glad. But you were not, Alwyn — you loved Amy?”

“And you love her still, but you love me, too? Do you know why she was not chosen?”

“Yes; I love you, Celia, though not so much as I loved Amy. They chose you instead of her, they said, because you had a stronger will and greater physical vigour. The slight curve we shall describe on rising will bring us over the Heat-house she and her other lover retired to after the Decision, and we shall perhaps see whether they are really dead, as we believe. Amy, I remember, had an heretical turn of mind.”

“If they are not dead, it is strange that they should not have answered our Marconi and telepathic messages after the first year — unless, of course, as you have so often suggested, they have retired to the interior of the other Red Sphere. How strange that it should have been left there! If they have only enough food, they may live in it till old age intervenes, secure from all the rigours that approach, but what a tame end — what a prisonment!”

“Terrible. I could not endure the Red Sphere except as we shall endure it — travelling.”