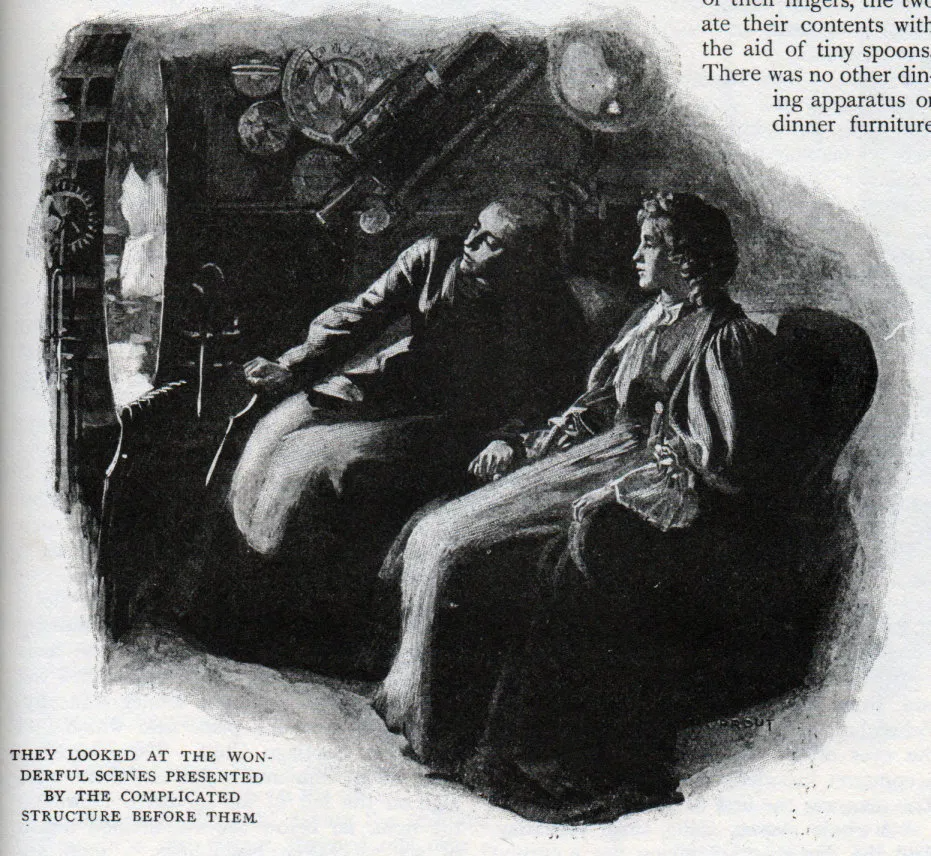 A man and a woman sat facing each other across a table in a large room. They were talking slowly, and eating — eating their last meal on earth. The end was near; the sun had ceased to warm, was but a red-hot cinder outwardly; and these two, to the best of their belief, were the last people left alive in a world-wilderness of ice and snow and unbearable cold.

The woman was beautiful — very fair and slight, but with the tinge of health upon her delicate skin and the fire of intellect in her eyes. The man was of medium height, broad-shouldered, with wide, bald head and resolute mien — a man of courage, dauntless purpose, strenuous life. Both were dressed in long robes of a thick, black material, held in at the waist by a girdle.

As they talked, their fingers were busy with a row of small white knobs let into the surface of the table, and marked with various signs. At the pressure of each knob a flap in the middle of the table opened, and a small glass vessel, with a dark, semi-liquid compound steaming in it, was pushed up. As these came, in obedience to the tapping of their fingers, the two ate their contents with the aid of tiny spoons. There was no other dining apparatus or dinner furniture upon the table, which stood upon a single but massive pedestal of grey metal.

The meal over, the glasses and spoons replaced, the table surface clean and clear, a silence fell between them. The man rested his elbows upon his knees and his chin upon his upturned palms. He did not look at his fair companion, but beyond her, at a complicated structure projecting from the wall. This was the Time Indicator, and gave, on its various discs, the year, the month, the day, the hour and the instant, all corrected to mean astronomical time and to the exact latitude and longitude of the place. He read the well-known symbols with defiant eyes. He saw that it was just a quarter to thirteen in the afternoon of Thursday, July 18th, 13,000,085 A.D. He reflected that the long association of the place with time-recording had been labour spent in vain. The room was in a great building on the site of ancient Greenwich. In fact, the last name given to the locality by its now dead and cold inhabitants had been Grenijia.

From the time machine, the man’s gaze went round the room. He noted, with apparently keen interest, all the things that were so familiar to him — the severely plain walls, transparent on one side, but without window-frame or visible door in their continuity; the chilling prospect of a faintly-lit expanse of snow outside; the big telescope that moved in an airtight slide across the ceiling, and the little motor that controlled its motions; the electric radiators that heated the place, forming an almost unbroken dado round the walls; the globe of pale brilliance that hung in the middle of the room and assisted the twilight glimmer of the day; the neat library of books and photo-phono cylinders, and the tier of speaking machines beneath it; the bed in the further corner, surrounded by yet more radiators; the two ventilating valves; the great dull disc of the Pictorial Telegraph: and the thermometer let into a vacant space of floor. On this last his glance rested for some time, and the woman’s also. It registered the degrees from absolute zero; and stood at a figure equivalent to 42º Fahrenheit. From this tell-tale instrument the eyes of the two turned to each other, a common knowledge shining in each face. The man was the first to speak again.

“A whole degree, Celia, since yesterday. And the dynamos are giving out a current at a pressure of 6,000 volts. I can’t run them at any higher efficiency. That means that any further fall of temperature will close the drama of this planet. Shall we go tonight?”

There was no quiver of fear nor hint of resentment in his voice, nor in the voice that answered him. Long ages of mental evolution had weeded all the petty vices and unreasoning passions out of the mind of man.

“I am ready any time, Alwyn. I do not like to go; I do not like the risk of going; but it is our last duty to the humanity behind us — and I must be with you to the end.”

There was another silence between them; a silence in which the humming of the dynamos in the room below seemed to pervade the whole place, thrilling through everything with annoying audibility. Suddenly the man leaned forward, regarding his companion with a puzzled expression.

“Your eyelashes are damp, Celia. You are not crying? That is too archaic.”

“I must plead guilty,” she said, banishing the sad look with an effort. “We are not yet so thoroughly adjusted to our surroundings as to be able to crush down every weak impulse. Wasn’t it the day before yesterday that you said the sun had begun to cool about five million years too soon for man? But I will not give way again. Shall we start at once?”

“That is better; that sounds like Celia. Yes, if you wish, at once; but I had thought of taking a last look round the world — at least, as far as the telegraph system is in order. We have three hours’ daylight yet.”

For answer, Celia came and sat beside him on the couch facing the disc of the Pictorial Telegraph. His left hand clasped her right; both were cold. With his right hand he pulled over and held down a small lever under the disc — one of many, each bearing a distinctive name and numeral.

To see a scan of the original publication, visit this site.