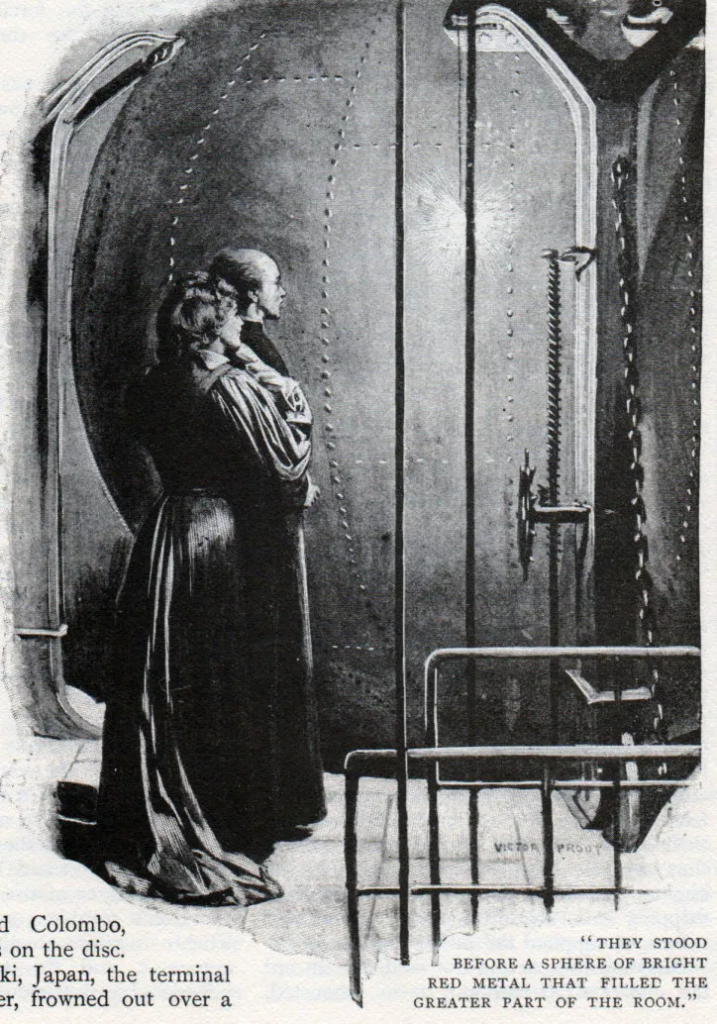 The side wall became opaque; the globe ceased to be luminous. A moving scene grew out of the dullness of the disc, and a low, moaning sound stole into the room. They looked upon a telegraphically-transmitted view of a place near which had once been Santiago, Chile. There were the ruins of an immense white city there now, high on the left of the picture. Down on the right, far below the well-defined marks of six successive beach-lines, a cold sea moaned over an icy bar, and dashed in semi-frozen spray under the bluff of an overhanging glacier’s edge.

Out to sea great bergs drifted slowly, and the distant horizon was pale with the ice-blink from vast floes. The view had scarcely lasted a moment, when a great crack appeared on the top of the ice-front, and a huge fragment fell forward into the sea. It overturned on the bar, churning up a chaos of foam, and began to drift away. At the same instant came the deafening report of the breakage. There was no sign of life, neither of man nor beast, nor bird nor fish, in that cold scene. Polar bears and Arctic foxes, blubber-eating savages and hardy seals, had all long since passed away, even from the tropic zone.

Another lever pressed down, and the Rock of Gibraltar appeared on the disc. It rose vast and grim from the ice-arched waters of a shallow strait, with a vista of plain and mountain and glacier stretching behind it to the hazy distance — a vista of such an intolerable whiteness that the two watchers put on green spectacles to look at it. On the flat top of the Rock — which ages ago had been levelled to make it an alighting station for the Continental aerial machines — rose, gaunt and frost-encrusted, the huge skeleton framework of one of the last flying conveyances used by man.

Another lever, and Colombo, Ceylon, glared lifeless on the disc. Another, and Nagasaki, Japan, the terminal front of a vast glacier, frowned out over a black, ice-filling sea. Yet more levers, and yet more scenes; and everywhere ice and snow, and shallow, slowly-freezing seas; or countries here black and plantless, and there covered with glaciers from the crumbling hills. No sign of life, save the vestiges of man’s now-ended reign, and of his long fight with the relentless cold — here ruins, on the ice-free levels, of his Cities of Heat; here gigantic moats, excavated to retard the glaciers; here canals, to connect the warmer seas; here the skeletons of huge metallic floating palaces jettisoned on some ice-bound coast; and everywhere that the ice had not overcome, the tall masts of the Pictorial Telegraph, sending to the watchers at Greenwich, by reflected Marconi waves, a presentment of each sight and sound impinging on the speculums and drums at their summits. And in every daylight scene, the pale ghost of a dim, red sun hung in a clear sky.

In the more northern and southern views the magnetic lights were as brilliant as ever, but there were no views of the extreme Polar Regions. These were more inaccessible than in the remote past, for there cakes and patches of liquid and semi-solid air were slowly settling and spreading on land and sea.

Yet more levers, and yet more; and the two turned away from the disc; and the room grew light again.

“It appears just as we have seen it these last two years,” said the man, “yet to-day the tragedy of it appalls me as it has never done before. I did not think, after all the years of expectation and mental schooling, that it would seem like this at the last I feel tempted to do as our parents did — to seek the safety of the Ultimate Silence.”

“Not that, Alwyn — not that. From generation to generation this day has been foreseen and prepared for, and we promised, after we were chosen to remain, that we would not die until all the devices of our science failed. Let us go down and get ready to leave at once.”

Celia’s face had a glow upon it, a glow that Alwyn’s caught.

“I only said ‘tempted,’ Celia. Were I alone, I do not think I should break my word. And I am also curious. And the old, strange desire for life has come to me. And you are here. Let me kiss you, Celia. That… at least, is not archaic.”

They walked hand-in-hand to a square space marked out on the floor in a corner of the room, and one of them pressed a button on the wall. The square sank with them, lowering them into a dimmer room, where the ceaseless humming of the dynamos became a throbbing roar. They saw, with eyes long used to faint light, the four great alternators spinning round the armatures; felt the fanning of the rapid revolutions upon their faces. By the side of each machine they saw the large, queer-shaped chemical engines that drove them, that were fed from dripping vats, and from many actions and reactions supplied the power that stood between their owners and the cold that meant the end. Coal had long been exhausted, along with peat and wood and all inflammable oils and gases; no turbines could be worked from frozen streams and seas; no air wheels would revolve in an atmosphere but slightly stirred by a faded sun. The power in chemical actions and reactions, in transmutations and compoundings of the elements, was the last great source of power left to man in the latter days.

After a brief glance round the room, they pressed another button, and the lift went down to a still lower floor. Here a small glow-lamp was turned on, and they stood before a sphere of bright red metal that filled the greater part of the room. They had not seen this many times in their lives. Its meaning was too forcible a reminder of a prevision for the time that had at last arrived.