One in a new series of posts by Tom Nealon, author of the highly popular 2010–2012 HiLobrow series DE CONDIMENTIS. The posts in the STUFFED series are inspired by Nealon’s collection of rare cookbooks, which he sells — among other things — via Pazzo Books. His rare cookbook catalog can be found here. 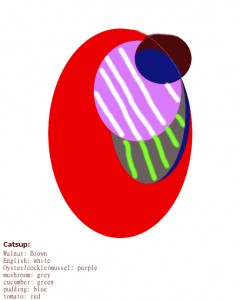 She sent her Priests in wooden Shoes
From haughty Gaul to make Ragous
Instead of wholesome Bread and Cheese
To dress their Soupes and Fricassyes;
And for our home bred British Cheer
Botargo, Catsup, and Caveer

Before there was “ketchup” as we know it, there were catsups — an array of condiments derived from Eastern fish and soy sauces. These catsups attempted to replicate the transformative culinary magic that British ex-pats and colonizers had experienced abroad. Only one type would triumph.

What did the catsups have in common? I’ve perpetrated a Venn diagram to sort this out, and laid out the recipes below.

I say “perpetrated” because the diagram is confusing, I know! Here’s the idea: It’s supposed to represent seven ideal catsup types — graphed according to (a) what my research suggests are the seven main catsup ingredient categories, and (b) how they overlap (i.e., some of the seven main ingredient categories appear in more than one of the seven catsups). The striped areas are where two of the catsups overlap. The blue is supposed to be a big oval — and peeking out the side, so you can tell it continues underneath the pink/grey, etc.

While there are a huge number of variations in catsup recipes, most of the variations were relatively minor, hence my list of seven catsup types and seven main ingredients. My theory is based on representative recipes from the handful of cookbooks that specialized in catsup.

The chart above shows the seven ideal types of catsup; below is a list of the seven main catsup ingredient categories:

What brought all these catsups together, during the 19th century, was catsup’s umami flavor: the concentrated glutamates that are found in profusion in anchovies, walnuts, mushrooms, and tomatoes. (See my DE CONDIMENTIS post on Fish Sauce for more on this fascinating topic.) Umami, and the very English desire for longer shelf life; this explains why catsups include wine or vinegar in addition to salt.

The one outlier, here, is cucumber catsup — which doesn’t have any umami flavor. Cucumber catsup is a curious, and likely insipid outlier in the Catsup War. 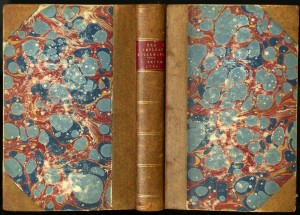 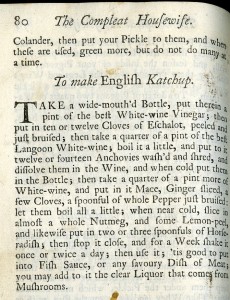 Here are a few notes on the seven catsup types which, during the 19th century, engaged in a struggle for supremacy. 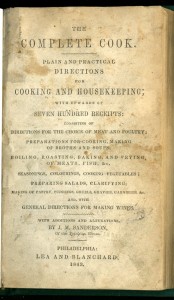 WALNUT: Whole walnuts mashed with salt, washed and beaten — after six days tilt the tub they are in and collect the liquid; add the usual allspice, ginger, pepper, cloves. Wait one year before using (Complete Cook, 1843). 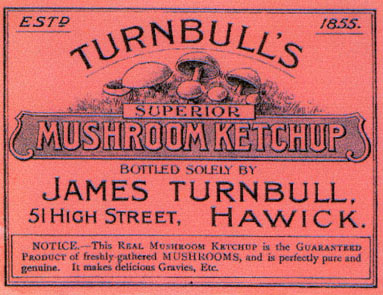 MUSHROOM: “A couple of quarts will save some score pounds of meat” — Kitchiner quoted in the Complete Cook. Salt, pound, add spices, boil down, add brandy (Complete Cook, 1843). [NB: No condiment was so generally esteemed as mushroom ketchup. There was a time in the 19th century when catsup was assumed to be a reduced and salty mushroom sauce].

What is commonly called catsup is generally an injudicious composition of so many different tastes, that the flavour of the mushroom is overpowered by a farrago of garlic, shallot, anchovy, mustard, horseradish, lemon-peel, beer, wine, and spices. — The Popular Encyclopedia (1836) 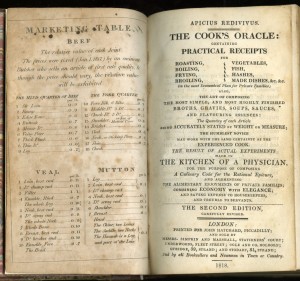 PUDDING: Brandy, mace, cloves, steep, add capillaire (note: a fern — but they might mean the syrup prepared from the fern), serve with melted butter (Cook’s Oracle, 1818).

A few notes on the outcome of the Catsup War:

At the time these cookbooks were written, mushroom catsup was everyone’s favorite. As we know from our vantage point, however, it was tomato catsup which triumphed over the others. How did the upstart tomato catsup become the seemingly natural, inevitable, and permanent “ketchup”? In true American fashion, that’s how: through overwhelming force! Tomato catsup used six of the seven catsup ingredients (sweet spices, savory spices, vinegar, fish, vegetable, shallots); everything but nuts. Hence the red-ness of my diagram, at top.

The other survivor was English, or “white” catsup, which today we know as Worcestershire Sauce (a more robust, but fundamentally similar catsup commercialized in 1837).

Tomato catsup became the triumphant “ketchup” because the various catsups were too similar. Tomato catsup’s shotgun approach overwhelmed and subsumed the others. Also, here in the United States home gardeners always had too many tomatoes on their hands in the summer; they had to do something with them. When Heinz figured out how to make tomato catsup shelf-stable without preservatives (in 1906, by using pickled tomatoes), its victory was assured. As can be seen on historical menus at the (terrific) NYPL menu project, by the turn of the 20th century the other catsups largely disappeared from widespread use (although the Hotel Astor continued to feature mushroom and walnut catsup until at least 1916).

In England, they took a more direct approach to imparting that umami flavor with products like Marmite (1902, made by autolyzing baker’s yeast to free the glutamates by force) and Patum Peperium (The Gentleman’s Relish: an anchovy paste) while a variety of brown sauces filled in the missing bits.

Though it’s not clear exactly when anchovies got dropped from the tomato ketchup recipe, I would suggest it is high time anchovies were added back in. In these unsteady times, we can use all the glutamates we can get.