Fifth in a series of posts revealing the secret history of condiments — and the influence they’ve had upon the course of history.

Queens, plagues, Jesuits, wine, food, and cannons! Today we think of vinegar as an ingredient; in fact it is the sine qua non of condiments, and it has a story that stretches back into the raspberry mists of pre-history. Wine was discovered around eight thousand years ago in what is now the country of Georgia; a few months later, after someone left an amphora out back after one of those notoriously rowdy, prehistoric Georgian get-togethers, vinegar (from the French vin aigre; sour wine) was discovered.

That’s the story, anyway — but even this underestimates the inevitability of vinegar. Vinegar, not just shit, is what happens: if there wasn’t a human on earth, you’d still find vinegar wherever there was a puddle beneath a pear tree, a small pond in an apple orchard or a be-fruited bog. Sugar and water, with the help of wild yeasts (what medieval open vat brewers used to call “God is Good”), ferment and produce ethanol. Wild, aerobic, ethanol eating, acetic acid bacteria turn it into vinegar. Put a cheese cloth over some cider and leave it out for a couple of weeks and you can witness the whole process. The justly-famed Jesuit scientist Athanasius Kircher, in one of the first uses of the microscope, discovered vinegar to be teeming with “worms” (what he was seeing were fermentation bacteria).

Cider wants to be alcoholic; honey water wants to be mead — and everything wants to end up vinegar. Industrial polution and the economies of scale have removed many natural yeasts and anaerobic bacteria from floating around our dwellings, so vinegars are more difficult to make now. In the past they didn’t so much have to be made; they happened. 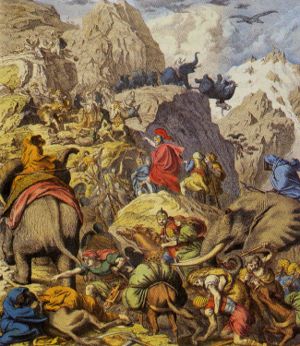 There’s a much-discussed passage in Livy that describes Hannibal using vinegar and fire to break through boulders on his way over the alps in 281 B.C.. Vinegar dissolves limestone but the alps are made of granite where he crossed, and the account has him using vinegar with fire to break the rocks. Pliny mentioned Spanish miners who used vinegar as an explosive as an explanation, and 18th century French texts frequently warn of the explosive properties of gaseous vinegar. Are we missing an ingredient? Is the recipe for explosive vinegar, like Greek fire and the Philosopher’s Stone, lost in the meandering maze of history? A recipe similar to, but more powerful than, the classic elementary school volcano? Recently, boring people have suggested that the vinegar was put inside the rocks and superheated to a gas that sundered the rocks, but that misses the point: vinegar was mighty, versatile and vital. Whether it melted the rocks, broke them apart with explosive force, or merely seemed to be able to, is immaterial. Myths, legends and expansive alchemical texts sprang up around vinegar because of its immense power — Paracelsus refused to drink his own urine without a liberal splash of balsamic, spawning the epithet “full of piss & vinegar” — and quibbling over who dissolved who blew up what and how just seems silly. And anyway, it’s hard to imagine the volatile punch of ancient vinegar when its latter-day descendants have been diluted into obeisance; just try blowing something up the next time you sit down to splash your fish and chips with malt vinegar or to dress your bitter green salad (the oil, by the way, stabilizes the explosive properties of the vinegar; John Evelyn’s 17th century treatise Acetaria: A Discourse on Sallets first noted the relationship between mixing oil and vinegar and the decrease in salad explosions).

Cleopatra dissolved pearls in vinegar to win a bet; Louis XIII used it to cool his cannons — which is not, as you might expect, a 17th century euphemism; vinegar actually cleaned and rust-proofed the imperial artillery (even that sounds dirty); and it was the only proof against the plague. Make up a story about what vinegar cures or enlivens, prevents or dispels, and it’s bound to have a dram of truth to it. Vinegar exfoliates. Vinegar sanctifies. Vinegar will never break your heart.

Vinegar has been at the center of medicine since ancient times.Dioscorides (Greece, 40–90 A.D.) has a whole series of medicinal recipes using animal feces and vinegar. Sounds crazy, right? But by adding vinegar to these and similar recipes, ancient physicians were guaranteeing them to be modestly non-lethal; the vinegar would take care of killing most of the harmful bacteria in the “grass-fed cow poop” that was the main ingredient of one recipe. Galen frequently used vinegar as a solvent for medicines, Hippocrates used to wash his hair with it after dealing with especially filthy clients, and Greek God of medicine Asclepius used to say, “τεθούν κάποια ξύδι σε αυτό, γι ‘αυτό σίγουρα δεν θα σας σκοτώσει” (Put some vinegar on it, for that surely will not kill you).

The 7th-century Greek physician Paulus Aegineta recommended it as proof against the plague; by the time the plague descended on England in 1665 its effectiveness was so widely known that all coins used in commerce in Derby were vinegared at the “Vinegar Stone” to prevent the spread of the dread disease. Those woodcuts of German doctors in bird costumes that seem like they have to be an invention? The beaks held vinegar and other aromomatics to ward off the plague. 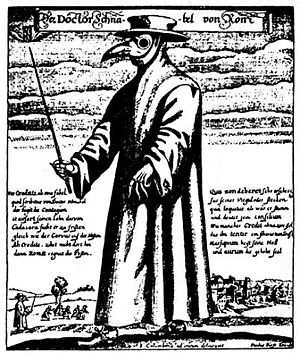 Perhaps the most famous vinegar/plague tale is the four thieves of Marseille (it’s actually a conflation of a 17th century story from Marseille and an early 18th century one from Toulouse). During a major outbreak, four thieves made their way through the city breaking into the homes of the living and dead alike, stealing everything of value. When they were finally caught, the police promised to spare their lives if they would tell their secret for avoiding contracting the plague. They supplied the following recipe:

VINEGAR OF THE FOUR THIEVES Take lavender, rosemary, sage, wormwood, rue, and mint of each a large handful; put them in a pot of earthen ware, pour on them four quarts of very strong vinegar, cover the pot closely, and put a board on the top; keep it in the hottest sun two weeks, then strain and bottle it, putting in each bottle a clove of garlic. When it has settled in the bottle and become clear, pour it off gently; do this until you get it all free from sediment. The proper time to make it is when the herbs are in full vigour, in June. This vinegar is very refreshing in crowded rooms, in the apartments of the sick; and is peculiarly grateful when sprinkled about the house in damp weather [from The Virginia Housewife, 1838]

Of course, they hung them afterwards anyway — thus sowing the seeds of vinegar’s debasement and decline.