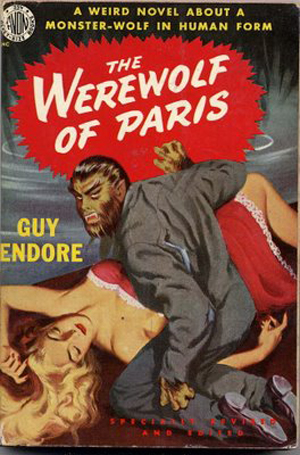 Though politically characteristic of the Brooklyn Jewish Communist of his day, creatively GUY ENDORE (Samuel Goldstein, 1901–70) had no party affiliation, was prisoner of no genre. His first novel, The Man from Limbo (1930), bore existentialist traces suggesting a kinship with Kafka — who first appeared in English translation that same year. The Werewolf of Paris (1933), Endore’s enduring work, is classified as horror but is actually a hybrid in which monstrous folklore and cryptozoology figure only somewhat. Set mostly during France’s Third Republic and the Paris Commune that briefly took it over, Werewolf is a stiff shot of Gothic Romanticism many years out of its time; a Santean descent into the fetid subterraneum of the City of Lights; and a roman à Revolution, steeped in factional intrigue, in which a primary character happens to be a flesh-feeding, bone-chewing lycanthrope. The novel’s fascinations with sensualism and martyrdom were prefigured in Endore’s earlier biographies of Casanova and Joan of Arc (and recapitulated in his later biographical novel about Sade), while its latent radicalism became overt in his 1938–48 work as a pamphleteer covering the Scottsboro trial aftermath, the Sleepy Lagoon case, and the LAPD killing of Mexican-American teenager Augustin Salcido. In the midst of everything, he published straight thrillers and co-wrote the patriotic standby The Story of G.I. Joe (1945).

Endore perhaps covers too much of the map too thinly. But the very deficits — wandering focus, erratic deployment of an unusual intelligence — that made him a minor writer in his time are allied to those other qualities — versatility and strangeness — that are worth our attention today.

On his or her birthday, HiLobrow irregularly pays tribute to one of our high-, low-, no-, or hilobrow heroes. Also born this date: Nathaniel Hawthorne, Rube Goldberg, Robert Desnos, Meyer Lansky, Ted Joans.