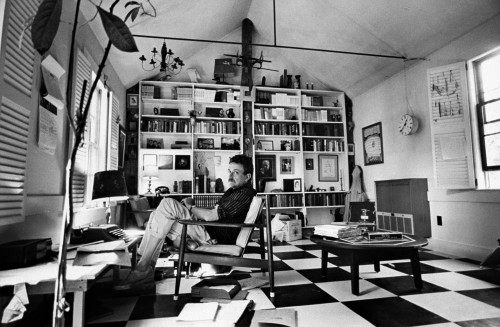 “Love may fail, but courtesy will prevail,” is the melancholy message embodied like a Tralfamadorian apocalypse warning into the life’s work of highest-possible-echelon humorist KURT VONNEGUT (1922-2007). This poetic maxim was distilled in 1978 by a high-school student named John Figler and Vonnegut agreed with it enough to preface his 1979 novel Jailbird with it: “I needn’t have bothered to write several books,” said Papa Kurt, “a seven-word telegram would have done the job.” But such a telegram, no matter how perfect, would have robbed us of such tragicomic treasures as Deadeye Dick (1982), Slaughterhouse-Five (1969), and my personal favourite God Bless You, Mr. Rosewater (1965) — in which volunteer firefighters and a family fortune demonstrate Figler’s Corollary with aplomb. Nor would such a telegram have given us characters like “Handicapper General” Diana Moon Glampers, Caribbean religious figurehead Bokonon, and down-at-heel science fiction writer Kilgore Trout, who is actually a kind of Loa marshaling the gateway between laughter and tears. Love may fail enough for atom bombs to disintegrate entire cities but courtesy will survive long enough for the body collectors to act honorably in the aftermath. Love may fail to free us, but courtesy allows us to sing this Bokononist calypso: We do, doodley do, doodley do, doodely do, / What we must, muddily must, muddily must, muddily must; / Muddily do, muddily do, muddily do, muddily do, / Until we bust, bodily bust, bodily bust, bodily bust.

On his or her birthday, HiLobrow irregularly pays tribute to one of our high-, low-, no-, or hilobrow heroes. Also born this date: Carlos Fuentes, Hans Magnus Enzensberger, U-God.