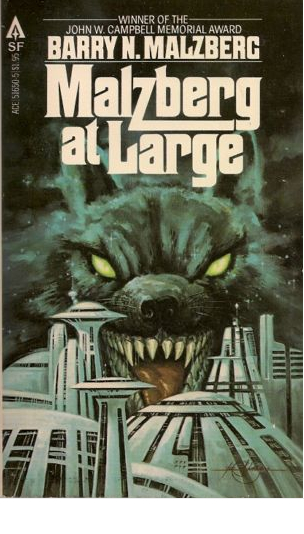 A time-traveler charged with preventing the Kennedy assassination makes matters (much) worse; the entire space program is an excuse for unsublimated sexual urges; a grandmaster playing for the fate of the universe is tricked into a Fool’s Mate: the science fiction of BARRY N. MALZBERG (born 1939) is a sustained assault on the genre-founding precept that reason and technology can reverse every crisis and overcome every obstacle. Though hardly alone in upending the triumphalism of Gernsback and Campbell, Malzberg’s contribution remains unique: his raging, dissociative monologues and fragmentary short-shorts read less like traditional sf than high-modernist experiments executed on paperback-original deadlines at pulpsmith rates. The haste and cheapness of much of this prose — two million words between 1968 and the mid-1970s — are never more integral to its effect than when Malzberg’s subject is commercial writing itself. In Herovit’s World (1973), a burnt-out hack attempts to regain control over his life by trading personalities with his more confident creations: “Kirk Poland,” his long-time pseudonym, and, more desperately, “Mack Miller,” the alien-conquering hero of Herovit/Poland’s “Survey Team” series. (Spoiler: It doesn’t work.) Malzberg hardly bothers to sustain the conceit that this is anything more “speculative” than an account of a schizoid break, as befits an author whose first major sale (“Final War”) was an experimental novella submitted to genre markets on the chance that “the ambiguity would appear, to a science fiction editor, as extrapolation.”

On his or her birthday, HiLobrow irregularly pays tribute to one of our high-, low-, no-, or hilobrow heroes. Also born this date: Lord Dunsany and Robert Graves.