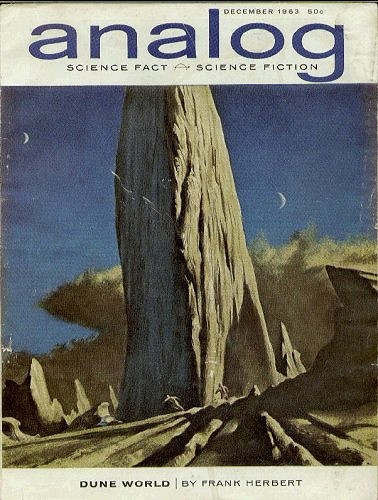 Alia, a telepathic four-year-old girl who, in the bestselling science fiction novel of all time, roams the battlefields of Arrakis slitting the throats of imperial stormtroopers, gained her powers in utero because her mother drank the “Water of Life” — i.e., the bile of a drowned sandworm. Was there something in the water the year FRANK HERBERT (1920-86), author of Dune (1965) and its five sequels, was born? After all, his exact contemporaries Mario Puzo, Isaac Asimov, and Richard Adams also wrote — respectively — a violent potboiler about one family’s declining empire, an epic SF series spanning thousands of years of future history, and a mythology-saturated fantasy about the founding of a new social order. The superheroic Paul Muad’Dib might have been invented by any number of members of Herbert’s generational cohort, which gave us Superman, Captain America, and the Silver Surfer; while Paul’s ragtag band — Thufir Hawat, the human computer; Gurney Halleck, the troubadour warrior; and master swordsman Duncan Idaho — are straight out of The Great Escape or The Magnificent Seven. However! The influence of Herbert’s secret muse — environmentalist Rachel Carson, whose Silent Spring appeared shortly before Analog began serializing Dune — distinguishes his own from these other entertainments. Inspired by Carson’s defense of the balance of nature, her criticism of man’s despoliation of the planet in the name of progress, the desert ecosystem portrayed in Herbert’s Dune is far more than a setting: it’s a mise en scène, a worldview.