In 1971, David Bowie (born 1947) released “Life on Mars?” — one of his best tunes — as a single, as well as on his album Hunky Dory. He explained, at the time, that the song’s protagonist — a sensitive young woman — “finds herself disappointed with reality… that although she’s living in the doldrums of reality, she’s being told that there’s a far greater life somewhere, and she’s bitterly disappointed that she doesn’t have access to it.” One of the girl’s sorrows is articulated like so: “It’s on America’s tortured brow / that Mickey Mouse has grown up a cow.”

The scrappy, witty, trickster-ish MM had turned into someone lame, a drag. It’s also worth noting that the neologism “cash cow” was then brand-new.

As we’ve seen in previous installments in this series, throughout the Sixties (1964–1973) members of Bowie’s generation snarkily savaged MM as a capitalist stooge, and an avatar of American shittiness. However, I’d suggest that Bowie’s take on MM, in “Life on Mars?”, isn’t snarky; it’s mournful. Bowie’s “girl with the mousy hair” is looking back sorrowfully; at a structural level, the song is a rebuttal to the Rat Pack bravado of Sinatra’s “My Way” (lyrics by Paul Anka, set to the tune of the 1967 French song “Comme d’habitude,” a favorite of Bowie’s). 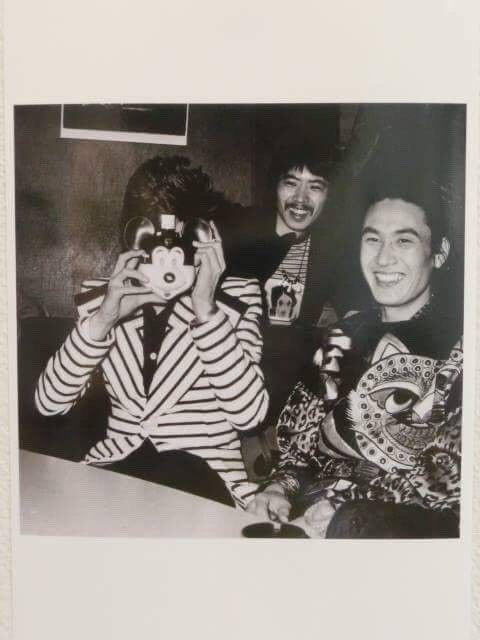 I’m including this note about “Life on Mars?” in this installment, as opposed to in the SIXTIES BACKLASH post, because — as always — Bowie was at least a decade ahead of his peers. They were snarky and cruel, when it came to depicting MM; he was ironic — in an engaged, not dismissive, way. He tried a little tenderness. During the cultural era known as the Seventies (1974–1983), as this installment will demonstrate, an anti-Sixties backlash occured within the MM backlash; it became OK, among nobrow cultural creatives following in Bowie’s footsteps, to love MM again… even if, simultaneously, one’s love were expressed in an ironic fashion.

The first years of the Seventies era (1974–1983) saw the birth of Punk, a movement that first developed — thanks to acts such as Television, Patti Smith, and the Ramones in New York, and the Sex Pistols and the Clash in London — from 1974–1976. The Ramones were known for reanimating uncool Fifties-era cultural detritus that their hip peers affected to despise. They brought back bubblegum pop, the 7″ single, leather jackets, straight-legged jeans, and… yes, Mickey (and Minnie) Mouse t-shirts.

If you resent what Mickey has become, but admire what he used to represent, while at the same time despising the sanctimonious Mickey-rejection that characterized the Sixties, how to advertise your complex MM affiliation? For the Ramones, as well as other punks and new wavers in the same milieu, the answer was: wear a Mickey tee, framed by your ripped jeans, chaotic hairdo, and ironic demeanor. The uninitiated might think you’re making fun of Mickey; the clueless might think you’re a Mouseketeer gone to seed. Let ’em wonder.

Andy Kaufman’s “Mighty Mouse” act — performed in NYC comedy clubs in the Seventies — is another excellent example of this sort of put-on.

In Bob Zmuda’s book about Kaufman — specifically about the period when he was doing his “Mighty Mouse” act — he writes, “Was Andy a wide-eyed innocent? Or was he a fearless and subversive outlaw, lampooning the mediocrity of the entertainment industry? To me, his writer for ten years, he was both.” 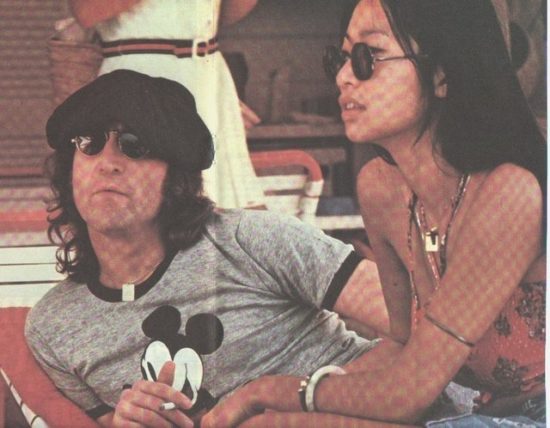 John Lennon and his assistant/lover, May Pang, took Julian Lennon to Disney World for a week in 1974. The trio stayed at the Polynesian Village Resort. While there, and while wearing a Mickey tee, John signed the paperwork officially disbanding The Beatles. Thus officially ending the Sixties. 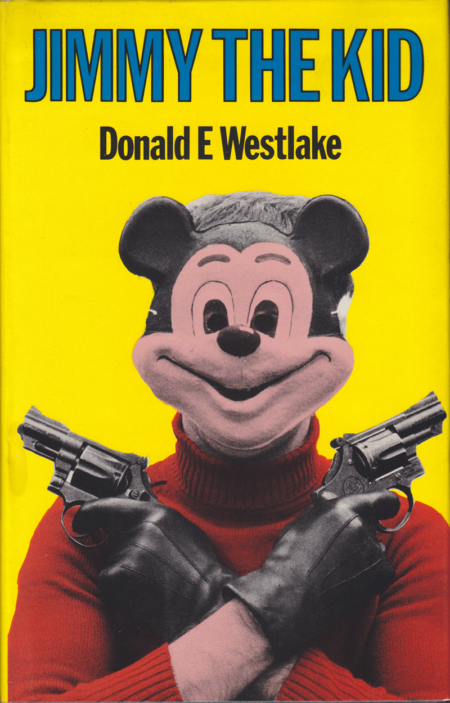 Above: UK hardback first edition of Donald E. Westlake’s Jimmy the Kid, published by Hodder and Stoughton in 1975. 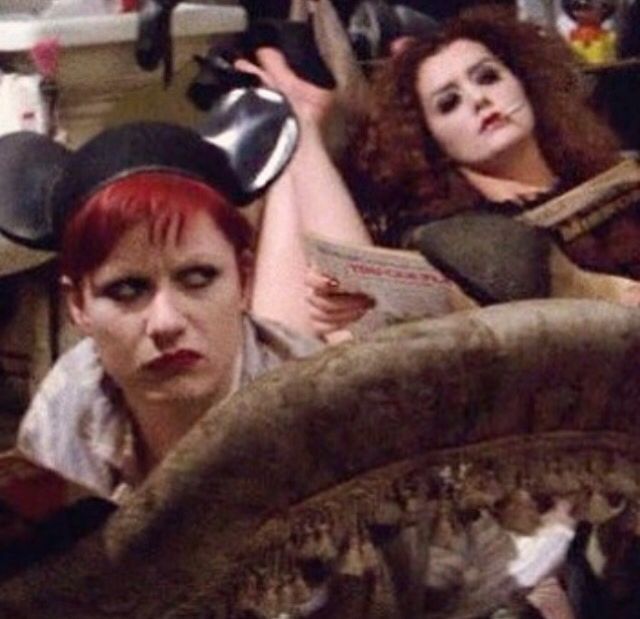 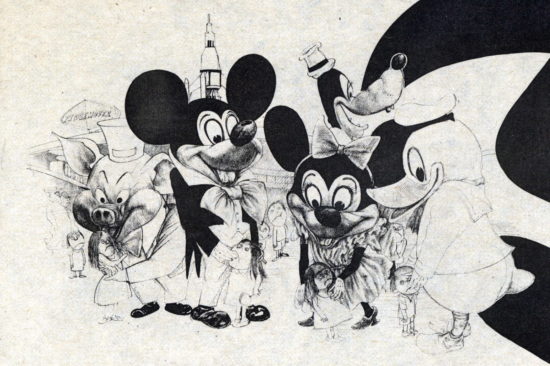 In 1975, the British illustrator Ralph Steadman — whose illustration for Hunter S. Thompson’s Fear and Loathing in Las Vegas (1971) we saw in an earlier installment in this series — was sent by Rolling Stone to write and illustrate “Ralph Steadman’s Disneyland”. 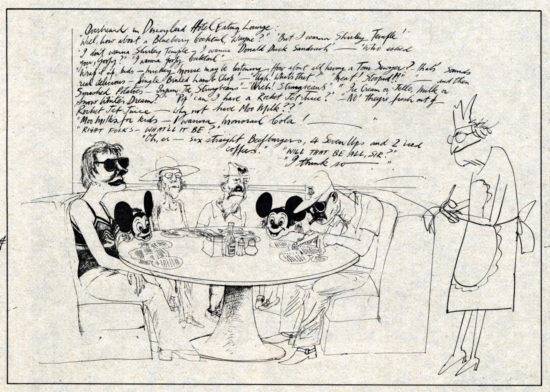 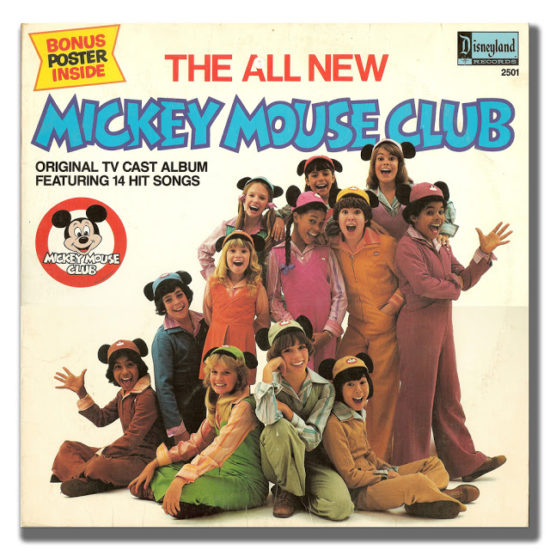 In 1977, the Walt Disney studio rebooted the Mickey Mouse Club. The results were unintentionally hilarious. 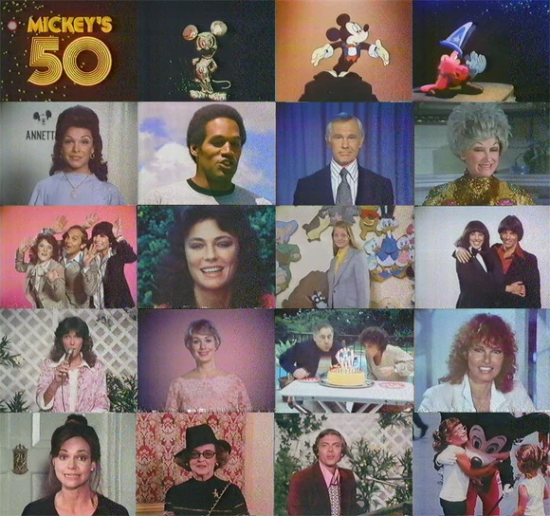 Even weirder: Throughout Mickey’s 50, a three-part live-action/stop-motion short animated by and starring Mike Jitlov seems to suggest that MM memorabilia collectors are actually insane. 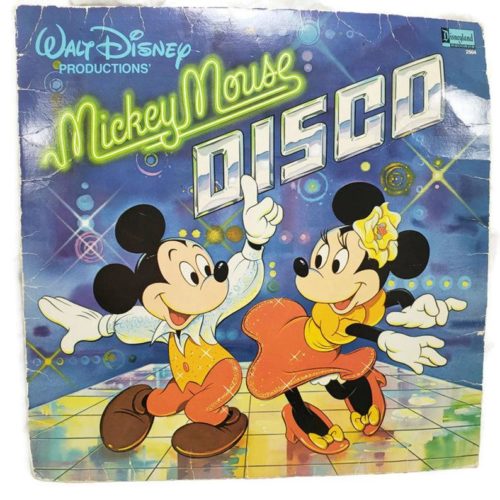 Fun fact: A sample of the discofied version of “It’s a Small World” can be heard on Fatboy Slim’s “Praise You” (1999).

A theatrically released compilation cartoon music video of the album was released in 1980. It’s horrible:

In 1979–1981, during the The Iran hostage crisis, images of Mickey Mouse flipping the bird — with the caption “Hey Iran” — became a popular meme. 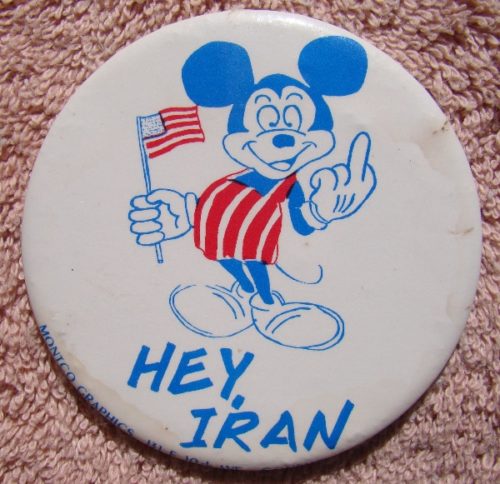 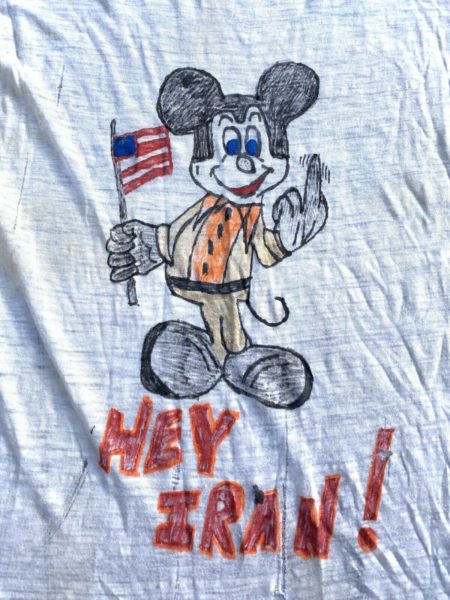 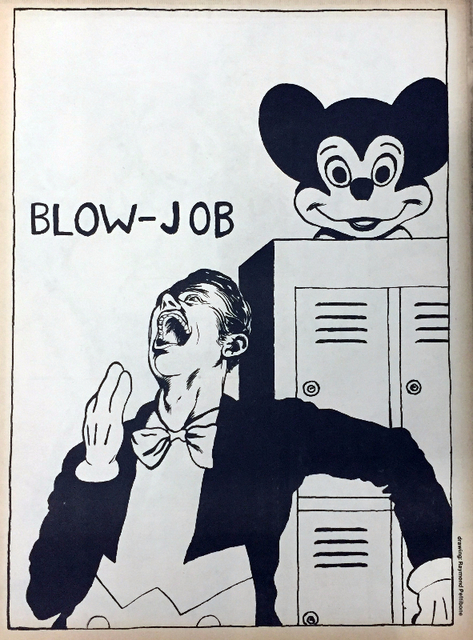 Above: A 1981 artwork by Raymond Pettibon (Raymond Ginn, born 1957), who came to prominence around that time in the southern California punk rock scene.

Pettibon was first known for creating posters and album art — e.g., Black Flag’s Family Man, In My Head, Jealous Again; Minutemen’s Paranoid Time, What Makes a Man Start Fires?; — for SST Records, which was owned and operated by his brother, Greg Ginn of Black Flag. 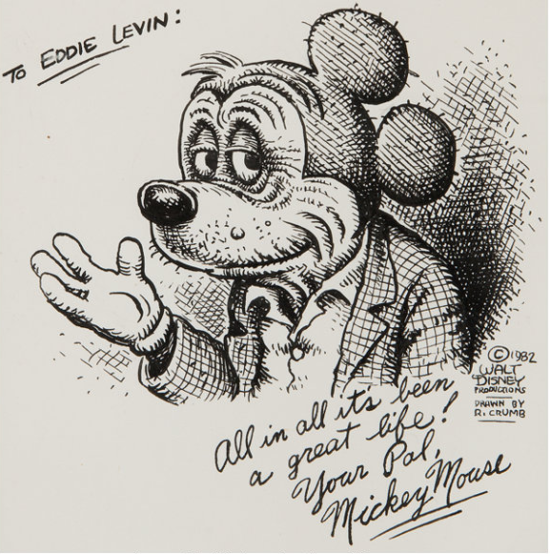 Above: A 1982 caricature of an aging MM, by underground cartoonist R. Crumb. 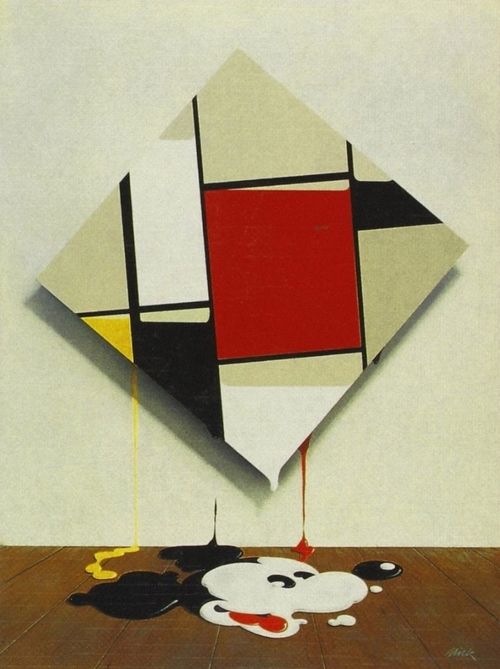 Above: In 1982–1983, when Condé Nast chairman Samuel I. Newhouse brought the long-shuttered café-society magazine Vanity Fair back to life, an early trial cover featured a 1978 painting, “Mickey Mondrian” by English designer and illustrator Mick Haggerty. 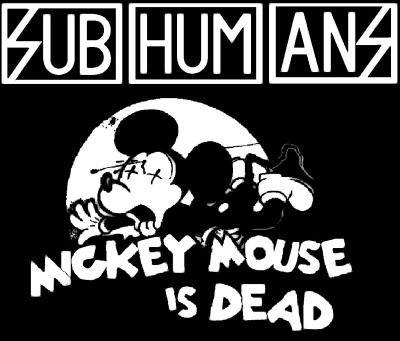 Let’s end this post with an excerpt from “Mickey Mouse Is Dead,” a 1983 song by the English hardcore punk band Subhumans:

Interesting to note that the Subhumans aren’t taking the piss out of MM, but angrily castigating those who’ve “killed” MM — which is who, exactly? 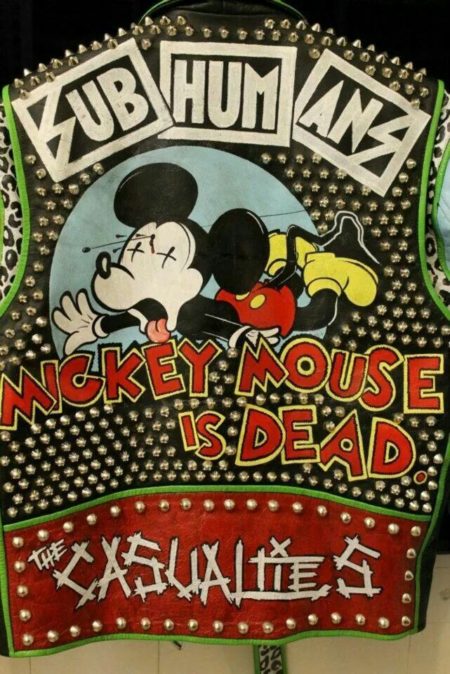