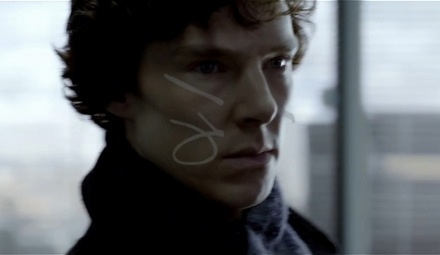 I’ve enjoyed watching the first three episodes of BBC’s Sherlock (aired this fall in the US; starring Benedict Cumberbatch and the brilliant Martin Freeman as Dr. Watson), particularly because doing so prompted me to revisit the notes I took, then put aside, when reading The Sign of Three (1983), a collection of essays about Arthur Conan Doyle’s character and the semiotician C.S. Peirce — or more precisely, Peirce’s theory of a little-understood mode of reasoning he named “abduction.”

[Sixth in an occasional series cross-posted from Semionaut, a blog co-edited by the author.]

Deduction, according to Peirce, proceeds from rule/guess (e.g., “All the beans from this bag are white”) to case (“These beans are from this bag”) to result/observation (“These beans are white”), whereas induction proceeds rather more tediously — from case to result to rule. I say “tediously” because a guess based upon both case and result/observation is a safe, habitual guess; detectives, who form hypotheses and then test them against the case (evidence), are more romantic figures. However, the authors included in the book mentioned above — including Thomas A. Sebeok, Marcello Truzzi, Carlo Ginzburg, Jaakko Hintikka, and Umberto Eco — pooh-pooh Holmes’ vaunted powers of deduction. Though Doyle’s stories do a terrific job explaining how deduction ought to work, Holmes’ skill at solving crimes is due, they claim, to a brilliant abductive ability — i.e., the ability to proceed, swiftly and with unerring accuracy, from rule/guess to result/observation to case. 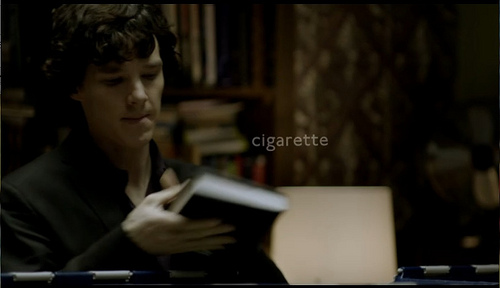 Abduction is something that all of us do, claims Peirce; in fact, it’s a hard-wired survival mechanism. However, he and Sebeok, et al., agree that some of us are particularly adept at abductive reasoning. Some of us see and remember more, so we’re superior at formulating rules/guesses; and then, when we compare a result/observation against one of our rules/guesses, we do so ultra-efficiently — in an almost holographic fashion. Those of us thus skilled at detecting deviations from law-like hypotheses are therefore able to see the reason why “like a flash,” claims Peirce. What’s more, the act of abduction is in such cases accompanied by a “peculiar musical emotion,” a thrill.

Sounds like Sherlock Holmes — his monographs on cigarette butts or corpses’ bruises, his lightning-fast insights, even his boredom and mood swings. The new BBC adaptation dramatizes Holmes’ holographic ability to compare a result/observation against one of his rules/guesses by causing words, patterns, and symbols to hover in the air before his face [shown above]. He’s viewing the evidence not empirically, we’re given to understand, but from the perspective of his own constructed universe: if Holmes’ hunches are always correct, it’s only because this is fiction.

Though he insists that his method is a strictly deductive one, at various points in the Holmes canon, Conan Doyle’s detective advocates the use of “imagination,” “intuition,” and “speculation.” This explains why his so-called deductions so often lead Holmes to make revelations which appear almost magical; and this is why Holmes despairs of colorless, boring cases. He’s an obsessive, quasi-apophenic pattern-maker. When he finds a flaw in the pattern, he’s thrilled; when he doesn’t, he’s bored. He’s an obsessive-compulsive overjoyed and outraged to find reality out of order. 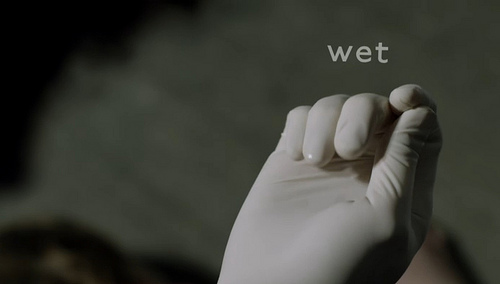 Holmes sounds, in this analysis, like a semionaut — i.e., a prodigy able to draw expertly and productively upon phenomenological knowledge when “reading” various signs. Yes, Holmes is a semionaut. However, I’m not always impressed with the immutable laws of nature and society of which Holmes has convinced himself. Though he says “I make a point of never having any prejudices” (“The Reigate Puzzle”), not a few of Holmes’ rules — about the habits of women, say, or foreigners — sound, to the contemporary reader, like prejudices. In the third episode of Sherlock, when Cumberbatch takes one look at a woman’s boyfriend and says, simply, “Gay” — same thing, right?

I’m not saying that Holmes is merely a brilliant bigot, like (say) G.K. Chesterton’s fun detective character, Father Brown, who solves crimes thanks to his hilarious Catholic prejudices against atheists, legalists, and Presbyterians. But he’s uncannily similar to a brilliant bigot. It’s mysterious!

The game is afoot.