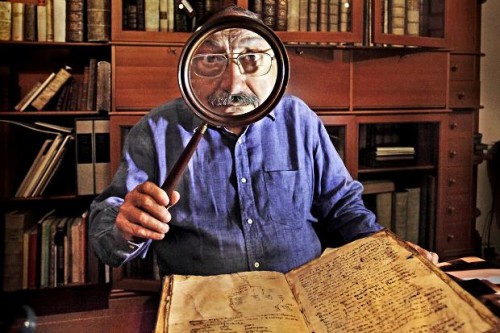 Italian semiotician and novelist UMBERTO ECO (born 1932) is an easy man to like. A long-ago New York Times Magazine profile caught up with him in the back of a cab, munching a slice of Wooster Square pizza — a better reason to visit New Haven than any talk at Yale could be. I interviewed him myself once, also long ago, and he insisted we drink whisky before, during, and after the exchange. Big man, big brain, big appetites. His early work in medieval philosophy — his doctoral dissertation was on Thomas Aquinas — laid a firm intellectual foundation for the large volume of media analysis, interpretation theory, and popular writing he has produced since. Eco’s best-known work remains The Name of the Rose (1980), a thoroughly enjoyable mixture of murder mystery and scholarly puzzle set in a 14th-century Catholic monastery without whose existence the success of Dan Brown is culturally unimaginable. His other novels are less fun, but there is a playful edge to everything he has written, from the heavily theoretical books, several now classics, to the breezy newspaper columns and occasional pieces. His Norton Lectures at Harvard, published as Six Walks in the Fictional Woods (1994), offer the perfect point of entry. Eco’s unusual surname is, he has suggested, an acronym of the Latin phrase ex caelis oblatus (“a gift from the heavens”), supposedly bestowed upon his foundling grandfather by a city official. That’s divine, but maybe just as good is that it is one little “c” short of the Italian interjection meaning “Here you are!” Like Nuke LaLoosh bringing the heat, Eco announces his presence with authority.

On his or her birthday, HiLobrow irregularly pays tribute to one of our high-, low-, no-, or hilobrow heroes. Also born this date: Michael O’Donoghue.