As noted in previous installments of this series, once Mickey Mouse became popular with children worldwide, Disney began to sand the rough edges off MM’s persona. Both at the level of content and form, during the early part of the cultural era known as the Thirties (1934–1943) the character evolved from a child-like imp (scandalous, id-driven, loveable yet uncanny) into a childish ’toon (cheeky, playful, cute, sympathetic). Mickey was the first victim of the middlebrow-izing process that would later be dubbed Disneyfication — the process, that is, of stripping something of its eccentric true character, and sanitizing it.

Mickey Mouse became, at this point, a true icon. Some years ago, I wrote a post for the international semiotics blog SEMIONAUT about what an “icon” — as opposed to a mere “symbol” — is. Excerpt:

[I]cons are meaning-bearing sign vehicles whose purpose it is — among humans and animals alike — to elicit or provoke, at a preconscious level, a particular space-time interaction. Ants, to employ an example favored by biosemiotics booster Thomas A. Sebeok, don’t choose to “milk” aphids for honeydew, but are impelled to do so by the iconicity of the aphid’s rear end (which, one should explain, apparently resembles an ant’s head). From a biosemiotic perspective, iconicity is about cognitive modeling, not communication.

During the Thirties, Walt Disney and his team reinvented Mickey Mouse as an icon intended to elicit at a preconscious level our hardwired instinct to adore that which is cute, innocent, cheery.

A 1934 magazine article under Walt Disney’s byline says that “I have tried give [Mickey] a soul and a ‘keep kissable’ disposition.” (Garry Apgar gushes: Mickey’s “eager, can-do attitude mirrored Disney’s own persona.”) It worked! In 1935 the League of Nations presented Walt Disney with a special medal recognizing that Mickey Mouse wasn’t merely a popular cartoon character, but nothing less than “a symbol of universal good will.” That same year, The New York Times Magazine described Mickey as “the best known and most popular international figure of his day.”

But Mickey’s persona makeover wasn’t enough, for Disney. In 1938, Disney animator Fred Moore redesigned the character’s look. White eyes with pupils replaced Mickey’s black pupils and undefined (enormous) eyes; the white parts of his face became “skin”-colored; his body became pear-shaped instead of round. “The change brought Mickey closer to us humans, but also took away something of his vitality, his alertness, his bug-eyed cartoon readiness for adventure,” writes John Updike in his introduction to The Art of Mickey Mouse (1991), a really useful and interesting book edited by Craig Yoe and Janet Morra-Yoe. “The original Mickey, as he scuttles and bounces through those early animated shorts, was angular and wiry, with much of the impudence and desperation of a true rodent.”

In the next installment of this series, I’ll take a look at Stephen Jay Gould’s anatomization of Mickey’s physical makeover. Here, let’s just ask ourselves why Disney transformed Mickey into an icon; and what the unintended consequences of doing so were. 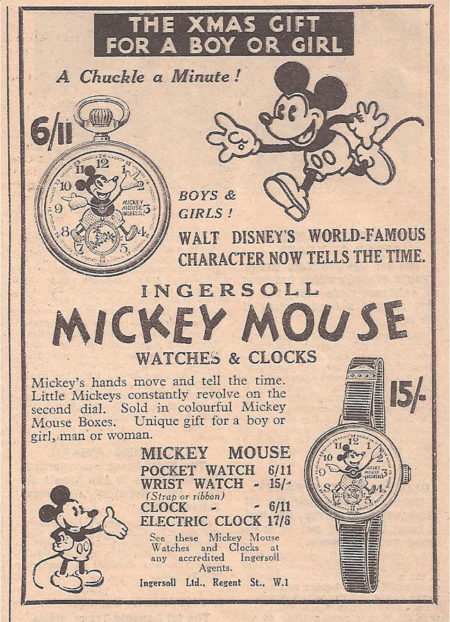 Mickey became cute, innocent, and cheery because he’d become a cash cow. Now only were his movies huge draws, but MM merchandising was wildly lucrative.

The Mickey Mouse wristwatch, manufactured by the Ingersoll-Waterbury Co. of Waterbury, which was widely publicized when it went on sale at the Century of Progress International Exposition in Chicago in the spring of 1933, sold a million units in eight months. The New York Times Magazine said that “by himself” Mickey had restored “a famous but limping watch-making company to health”; Ingersoll added 2,700 workers to its payroll and proceeded to sell millions more Mickey Mouse watches. 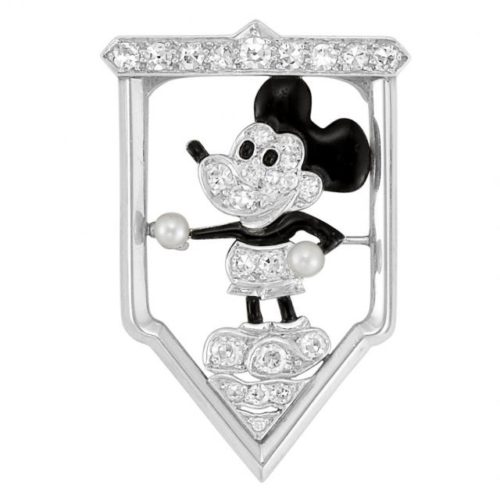 When Cole Porter’s 1934 song “You’re the Top” included the line “You’re Mickey Mouse,” he was referring to Mickey’s popularity — his status as an icon — along with the Coliseum, the Louvre, a Shakespearean sonnet, the Mona Lisa, a Strauss symphony. That is to say, Mickey had ascended to a height at which ordinary judgement would be suspended. Like all icons, Mickey was now on a pedestal.

Apgar, making his case for Mickey Mouse as icon, claims that the term means “a being or thing touched by a vital spark, providing meaning, comfort, and connectedness across generational, ethnic, national, and class lines.” However, as I mused in the aforementioned SEMIONAUT essay, iconicity is a less comforting, more uncanny phenomenon than what Apgar is describing.

There’s something about a statue of a popular figure (on a pedestal) that almost demands — at a preconscious level — that we deface it, pull it down, behead it. When Saddam Hussein’s statue in Baghdad was yanked from its pedestal in 2003, HILOBROW friend Luc Sante wrote, in The Boston Globe, that the statue seemed “almost to will its own collapse.” I’m also thinking of Saul Steinberg’s 1958 New Yorker essay-drawing of a series of statues, each one featuring a triumphant new ruler standing over the corpse of the ruler celebrated by the previous statue. 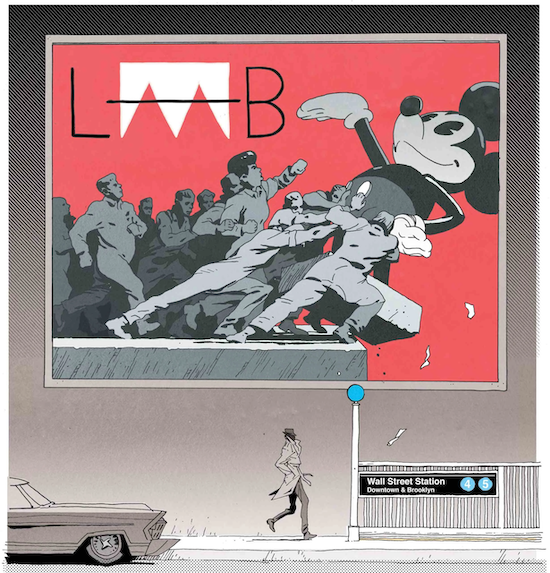 What I’m getting at is this: Mickey’s meteoric rise to the status of icon would prove to have the unintended consequence of provoking the anti-Mickey backlash. It’s almost as though we couldn’t help it.

Above: An image from the broadsheet LAAB, Issue No. 0 (2019), by cartoonist Ronald Wimberly (Prince of Cats, Black History in Its Own Word). 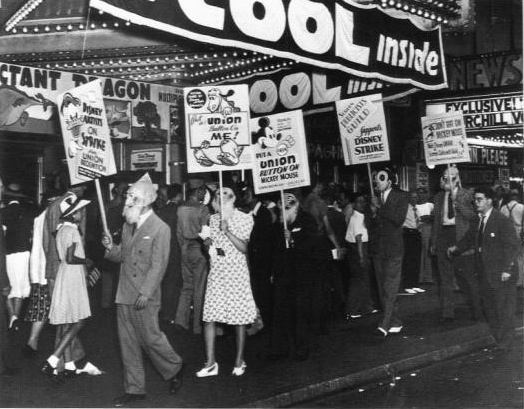 Above: During the 1941 Disney Strike, a man in a MM mask (just right of center) joins others in picketing the premiere of Walt Disney’s 5th feature film, The Reluctant Dragon.