The dark side of Scrabble 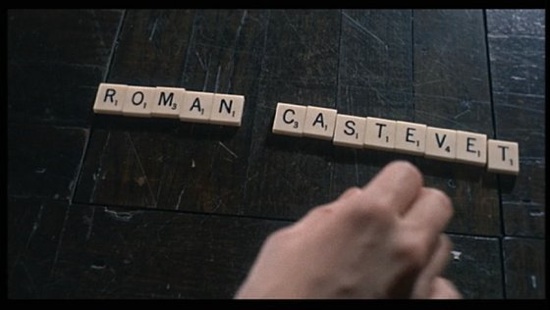 SCRABBLE IS a hilobrow board game; it rewards mental agility, a large vocabulary, and a cutthroat thirst for victory. Like all things hilobrow, the game (invented by an architect in 1938, it first achieved popularity in 1952) is enjoyed by highbrows and lowbrows alike. And yet, it subtly puts players on edge, revealing to them at some not entirely conscious level the shortcomings of their worldviews. Somehow — I don’t pretend to understand the mechanism — Scrabble revalues our received values, overturns our normalized boundary stones, produces or releases new energies.

A version of this essay was published by the Boston Globe’s Brainiac blog, in December 2007.

But don’t take my word for it. Here’s the proof: in highbrow and lowbrow novels and movies since 1952, the game has served as a symbol of taboo sex, mental illness, and lethal violence. The game Scrabble, for highbrows and lowbrows alike, represents the status quo (as in the quote, below, from Abbie Hoffman’s 1969 treatise, Woodstock Nation) in the moment of its demise.

Once upon a time, about a generation ago, right after the thirteen-thousand-seven hundred-and sixty-fourth demonstration against the war in Vietnam, young people started to congregate in an area of San Francisco known as the Haight Ashbury. They were sick of being programmed by an educational system void of excitement, creativity and sensuality. A system that channeled human beings like so many laboratory rats with electrodes rammed up their asses into a highly mechanized maze of class rankings, degrees, careers, neon supermarkets, military-industrial complexes, suburbs, repressed sexuality, hypocrisy, ulcers and psychoanalysts. The world they came from was a world of Double Speak. A world where Lyndon Johnson and his fabulous wife Lady Bird sat in their Miami-modern ranch house, drank their bourbon, and led the nation in a marathon game of Scrabble.

And what of Middlebrow, whose raison d’être is the domestication of disruption, the productive and profitable synthesizing of every thesis-antithesis? How does Middlebrow feel about Scrabble? In the middlebrow novels and movies I’ve encountered while researching this subject, Scrabble represents the unhappy compromise of thesis and antithesis, a defeated shrug of the shoulders. Instead of taboo sex, in middlebrow fictions Scrabble represents adultery; instead of mental illness, quiet desperation — a stoic acceptance of a bad situation; instead of violence, domestic malaise.

Although Ike and Mamie Eisenhower famously enjoyed many an innocent Scrabble match, in highbrow fiction the game is much racier. For example, when Van Veen and his cousin/lover, the titular nymphet of Nabokov’s Ada (1969) can’t ditch her little sister, Ada coos, “She thinks we are going to play Scrabble without her, or go through those Oriental gymnastics which, you remember, Van, you began teaching me, as you remember.”

Bored of staying in and playing Scrabble with their spouses, in dozens of low-middlebrow novels I surveyed, men and women take lovers and plan divorces. In lowbrow crime novels, however, the mere mention of Scrabble is a signal that lust-murder is in the air. Here are a couple of examples:

“What do you think I’m proposing, Richard Queen, a game of Scrabble?” He took a
step toward her. And stopped, swallowing hard. “But Jessie, I’m an old man…” — Inspector Queen’s Own Case: November Song (1956), by Ellery Queen

She was sitting by herself at a card table with a Scrabble game half finished, an empty coffee cup beside her, looking annoyed as hell. “Lose your partner?” I asked her. — The Erection Set (1972), by Mickey Spillane

Consider, too, the plight of Offred, heroine of Margaret Atwood’s highbrow novel The Handmaid’s Tale (1985), a dystopia set in a totalitarian future Cambridge, Mass.; she is the slave and concubine of Commander Fred, who uses her at will for sex… and Scrabble. Excerpt:

So that’s what’s in the forbidden room! Scrabble! I want to laugh, shriek with laughter, fall off my chair. This was once the game of old women, old men, in the summers or in retirement villas, to be played when there was nothing good on television. Or of adolescents, once, long long ago…. Now of course it’s something different. Now it’s forbidden, for us. Now it’s dangerous. Now it’s indecent.

From its early days, highbrows have associated the game with mental illness. In a posthumously published memoir, Near the Unbalanced Aquarium (written circa 1955-56), the poet Robert Lowell recounted a stay in New York Hospital’s Payne Whitney Clinic, where he was treated for manic depression: “I sat gaping through Scrabble games,” he wrote, “unable to form the simplest word.”

Likewise, when the narrator of The Bell Jar, published in ’63 by Sylvia Plath, a former student of Lowell’s at Boston University, is sent to a mental hospital, she gripes bitterly about “the English teacher I had in high school who came and tried to teach me how to play Scrabble.”

Middlebrows, who adore Sylvia Plath, have borrowed the image ever since. Scrabble is played by the mentally ill in low- and high-middlebrow novels and memoirs like Sybil (1973), Ordinary People (1976), Rick Moody’s Garden State (1992), and Susanna Kaysen’s Girl, Interrupted (1993).

If Scrabble is supposed to be therapeutic for the mentally ill, then why do we find it mentioned in the same breath as lethal violence in highbrow and lowbrow fictions? A few examples:

“They obey their mothers. They don’t go into a dark cellar without expecting to be strangled by a zombie. They bless themselves constantly. And us, what do we do? We watch television and play Scrabble. So there it is, children of light and darkness.” — Americana (1971), by Don DeLillo

“Lydia, sex isn’t everything. You are obsessed. For Christ’s sake, give it a rest.” “A rest until your leg heals? How am I going to make it meanwhile?” “I’ll play Scrabble with you.” Lydia screamed. The car began to swerve all over the street. “YOU SON-OF-A-BITCH! I’LL KILL YOU!” — Women (1978), by Charles Bukowski

Never mind that I am twenty years Pym’s junior. What I recognize in Pym is what I recognize in myself: a spirit so wayward that, even while I am playing a game of Scrabble with my kids it can swing between the options of suicide, rape and assassination. — A Perfect Spy (1986), John le Carré’s most autobiographical novel 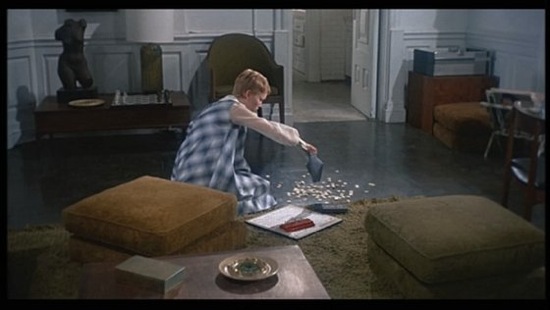 So is Scrabble’s colorful grid of letters a mind-altering technology; does the game force us to revalue our values? Or is it a Kabbalistic-theosophist meditation, perhaps, a family-friendly means of studying permutations of the divine Name? Might the game accidentally tap into an occluded reality, accidentally reveal some carefully concealed truth?

We find this suggested in the 1968 highbrow thriller Rosemary’s Baby, for example, when Mia Farrow uses a Scrabble game to unlock the movie’s dark secret. In Paul Theroux’s 2001 novel, Hotel Honolulu, we catch a glimpse of the game as it might be seen by an alien, or a primitive — i.e., as a medium of divination.

His head lowered in reverence, the dark islander put out a set of fetish objects, like a shaman engrossed in a ritual for telling the future or interpreting the past…. His face was close to a painted square that was blocked with the sort of mystical patterns you find in the boldest mandalas of Oceania…. Peewee hurried behind me and said. ‘You want to play?’ It was Scrabble.

And then there’s Seymour Epstein’s Leah: A Novel (1964), in which we read: “But what I mean is that the subject, any subject, has only a sort of fill-in value, like the blank piece in a game of Scrabble.” And Duke Ellington’s early pronunciamento: “Playing ‘bop’ is like playing Scrabble with all the vowels missing” (interview with Look Magazine, August 10, 1954). And Robert Lowell, again: “I sat gaping through Scrabble games, unable to form the simplest word; I had to be prompted by a nurse, and even then couldn’t make any sense of the words the nurse had formed for me.”

Is it a coincidence that sign and signifier seemed to have come unhinged so soon after Scrabble became popular? Is it a coincidence that the advent of Scrabble coincided so neatly with the “moment of theory” in the humanities? Does Scrabble liquefy formal meanings and structures, or merely enable the layman to glimpse momentarily what ascetic skeptics and sages from Heraclitus to Derrida thought was theirs alone to see: transcendental experiences, breakthrough phenomena, “becoming” in the flux of life?

Either way, readers, for highbrows, lowbrows, and middlebrows alike, this hilo boardgame spells nothing but T-R-O-U-B-L-E.

There’s more where these examples came from! Draw your own conclusions. I’ve stashed my research here.