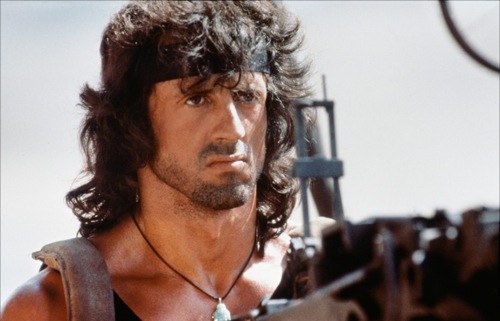 FEED (December 3, 1999): Thanks to noted feminist Susan Faludi, many of us had begun to feel sorry for Sylvester Stallone. “I feel like the case of the Greek persona wearing the mask,” Stallone mumbled to Faludi in her recent book, Stiffed. “And he takes it down, and you don’t recognize who this person is — I don’t exist. It’s like people see right through me.” The multimillionaire actor/director is trapped in a body so perfect that, as he explains, “It’s like the orchid; it’s so gorgeous, but it’s a parasite. It lives off of everything but what it is.” Pretty deep stuff, but recently Stallone’s classical references have gone from charmingly inappropriate to frighteningly telling. A lawsuit brought earlier this week against Stallone by former employees — who claim that his wife imposed “odious” household rules upon them — suggests that the Italian Stallion has come to think of himself as a Greek god.

This is the ninth in a series reprinting FEED Dailies written by the author in 1999-2000. 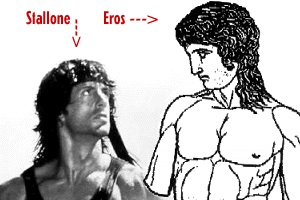 Four years ago, around the time Judge Dredd was jet-packing its way into the hearts of dozens, Stallone’s wife Jennifer Flavin warned five temporary cooks and cleaners at her Miami estate they could be fired if they failed to “back out and vanish immediately” whenever her husband entered the room. Nor were they ever permitted to look directly into the eyes of the lord of the manor. Weird? Not to those of us who’ve already noticed the startling resemblance between Stallone, circa his reactionary Rambo trilogy, and the muscular, hirsute statue of the Greek god Eros displayed in the Vatican. According to myth, Eros — who, like John Rambo, goes around armed with a bow, unerring arrows, and a flaming torch — didn’t allow mere mortals to look at him, either. In fact, when Psyche (the personification of the human soul) sneaked a peek at Eros in his bedroom, she was driven from the mansion by Eros’ jealous mother/companion Aphrodite. Paging Joseph Campbell! 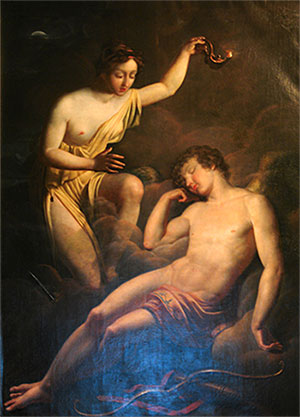 Actually, we should probably page Dr. Freud, who found the myth of Psyche and Eros as compelling as the legend of Oedipus. Perhaps Freud would have seen Stallone as soulless Eros, living a shallow, narcissistic existence, making himself and others miserable. (Stallone’s choices of film roles would seem to make him more of a Thanatos figure, you say? You sense more death than love? You must not’ve caught his first film, the 1970 porno Party at Kitty and Studs/The Italian Stallion.) Flavin, for her part, would certainly make a good Aphrodite. Just as Eros’ beautiful mother tried to destroy the mortal interloper Psyche by setting her odious tasks, fashion model Flavin requires the servants to undergo daily searches, won’t let them eat or drink in the mansion, and forces her maids to check guests’ suitcases to see if they took towels or silverware. Until Stallone/Eros stops allowing Flavin/Aphrodite to block his access to ordinary mortals/his own soul, Freud might well conclude, he will never become fully human.

But has Stallone ever been fully human? Psyche spies on Eros, according to the myth, because she’s afraid he might be a beast — a frightening winged serpent. Indeed, in Freud and Man’s Soul, the psychologist Bruno Bettelheim explains that as long as Eros is estranged from that part of himself which is most human, he will always appear grossly sexual or monstrous. Isn’t this exactly what Stallone complains about — that for every nuanced Cop Land performance he turns in, he’s forced to slug his way through five Rocky pictures? Come down off Olympus/Planet Hollywood and make another Paradise Alley, Sly! You can start by letting the staff look at you.

Launched in May 1995, the web magazine FEED — which helped launch the careers of Steven Johnson, Steve Bodow, Keith Gessen, Joshua Micah Marshall, Erik Davis, Christine Kenneally, Alex Abramovich, Chris Lehmann, Sam Lipsyte, Alex Ross, Clay Shirky, Ana Marie Cox, and many others, including yours truly — went offline in the summer of 2001. In June 2010, its archives were made available. This is the ninth in a series reprinting a few of my own favorite FEED Dailies.