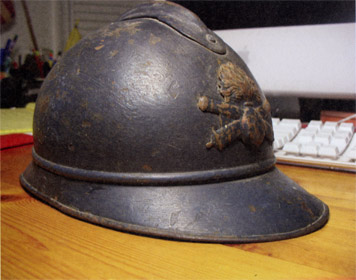 I collect First World War artifacts, but not because I am one of these guys who spends his weekends reenacting battles. I have trouble even understanding why someone would want to act out the trench warfare of 1917. This was wholesale slaughter, industrialized and indifferent to individual heroics. Take a number and die. One might as well reenact the Spanish Flu.

I regard this French artillery helmet as a token of monumental disillusionment, a reminder of the greatest-ever failure of enlightened, middle-class, Christian civilization. This was the event where the official narrative — delivered by statesmen, preachers, and leaders of industry — ran so contrary to reality that faith in those institutions was weakened forever.

As it happens, my hometown of Kansas City is the location of a twenty-one-story-high World War I monument and a very large collection of Great War artifacts. As a schoolboy I approached these pieces with the form of patriotic reverence that the museum and the monument embodied. American wars were about freedom, I believed. And honor. And protecting hometowns. It was difficult for the idealistic young me to grasp that what happened on the Western Front was that millions of brave men were ordered to die in an ill-planned and essentially futile conflict.

Today we are in the grip of a different sort of pro-war sentiment, a militarism in which the cynicism is readymade and the disillusionment is build-in, in which our GIs are always said to be betrayed by journalists and (liberal) politicians back home. Whenever some of that angry logic floats my way, I find it helpful to gaze upon that steel helmet and remember the lessons its wearer learned.

See All Posts by Tom Frank

The subject of Tom Frank's most recent book, Listen, Liberal!,is the Democratic Party’s failure over the last few decades to do anything really meaningful about income inequality.