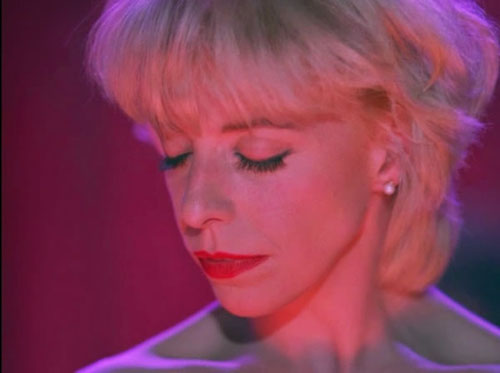 The Lady in the Radiator, you remember, was the dolly with leprous cheeks who staged a nightly show behind the bars of a heating unit in David Lynch’s Eraserhead (1978). Singing with virginal innocence when not delicately squashing spermlets beneath her Mary Janes, she offered movie history’s least comforting affirmation of eternal life. Years later, her specter haunted America in the voice of JULEE CRUISE (born 1956), whose tones shrouded Lynch’s Blue Velvet in the “Mysteries of Love.” No such movie had ever been seen, but the voice was the Lady’s, whistling up the pipes of memory, perfected, elevated — as tender and chilling as the wind whose appearance, the song said, would open the mysteries. In subsequent collaborations with Lynch and composer Angelo Badalamenti (solo albums Floating Into the Night and The Voice of Love; Twin Peaks, on small and large screens; “Summer Kisses, Winter Tears,” from a Wenders movie), Cruise’s voice remained airborne and impersonal, creamy yet sexless, insensible of lust but aware of terror. A good many people were captivated by its emptiness and its fullness: there seemed so little within it, so much behind, beneath, and above it. That had much to do with the musical world — dark, boundless, secretive — that Lynch and Badalamenti built around their singer. But the rest was Cruise’s command of the possibilities of stillness, modulations of rapture and grief in a space so tiny it was less an expressive range than a point of light. It was that command that empowered her to deliver unto premillennial America an apotheosis of the promise once made by her ancestor, the Lady: “In Heaven, everything is fine.”

On his or her birthday, HiLobrow irregularly pays tribute to one of our high-, low-, no-, or hilobrow heroes. Also born this date: Woody Allen, Gary Panter, Richard Pryor, Sarah Silverman.