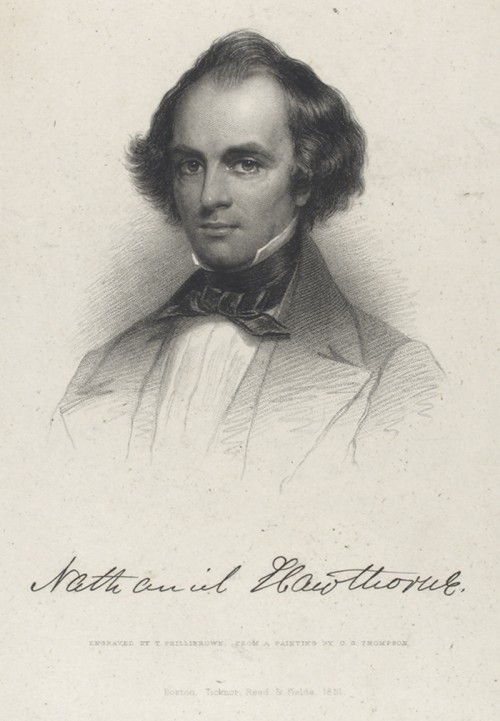 NATHANIEL HAWTHORNE (1804–64) wrote reformed myths to reform his readers. A torn Puritan’s Surrealism. Well, it worked on me. Shortly after reading The House of the Seven Gables — a Victorian Sleeping Beauty mashup — I began citing my new favorite quote whenever someone spoke of societal woes; I’d say “there are only weeds where there are people.” Hawthorne isn’t heady enough for “make your life your art,” he just pragmatically urged betterment. Preachy downer style. Hawthorne agreed with Grimm’s universal, mythical dark. He was mindful of how horrible we can make one another if we’re not careful — like the relative of his who cast quite a spell by presiding at Salem’s witch trials. Hawthorne was opportunistically over-involved in Brook Farm, influenced peers and wrote well for children. Poe criticized his meddling, Henry David Thoreau was a neighbor; he was buried by Ralph Waldo Emerson, Oliver Wendell Holmes, and Henry Wadsworth Longfellow. PS: Though there are many metaphorical weeds in Seven Gables, and even some semantic relatives of my favorite quote, nothing’s close enough. It’s not in the book. But I feel Hawthorne made me say it.

On his or her birthday, HiLobrow irregularly pays tribute to one of our high-, low-, no-, or hilobrow heroes. Also born this date: Robert Desnos, Rube Goldberg, Meyer Lansky.