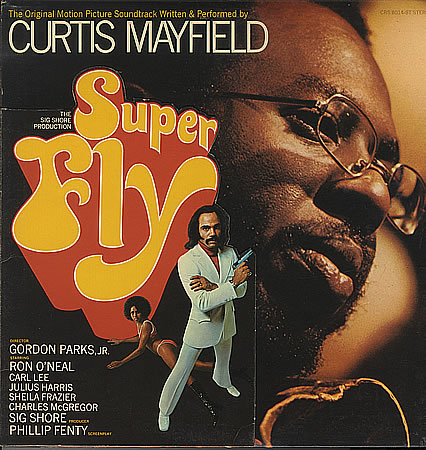 There are two kinds of people in this world: Shaft and Superfly people. But while Shaft and Isaac Hayes have long enjoyed an irony-driven revival, the far superior Superfly and CURTIS MAYFIELD (1942-99) are overdue for a comeback. Paralleling the films’ qualities, Mayfield’s soundtrack is simultaneously more campy, more moving, and more subversive than Hayes’. Mayfield did have his share of hits, both in and out of The Impressions: among them, “People Get Ready,” “Move On Up,” and “Freddie’s Dead.” But considering his influence on artists as diverse as Whitney Houston and Bad Brains, and his unique ability to chronicle urban black America from the tumultuous ’60s to the apocalyptic ’70s, we should be surrounded every day with Mayfieldiana.

On his or her birthday, HiLobrow irregularly pays tribute to one of our high-, low-, no-, or hilobrow heroes. Also born this date: | Allen Ginsberg | Suzi Quatro |