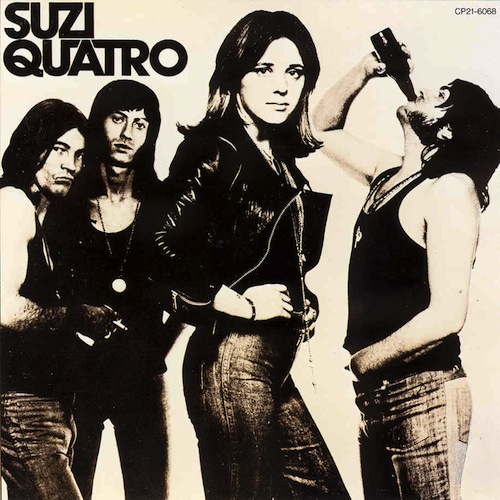 By the time SUZI QUATRO (born 1950) made her first appearance on Happy Days in 1977, I was long past my teeny-bop crush on the Fonz. Decked out in an anachronistic shag cut and sequined jumpsuit, Quatro played reform-school girl Leather Tuscadero and, with her bass guitar strapped low, performed both oldies and kitschy classics like “Do the Fonzie” with glam-rock aplomb for the next three years. Deep in the throes of punk rock, I was unimpressed. I may have even — oh, callow youth! — dismissed her as a Runaways wannabe. Had American radio embraced her as fervently as its European counterpart, I might have discovered what Joan Jett, among others, already knew: Quatro blazed a trail for punky tough female guitar-slingers. Behold her lip-synched performance supporting “Can the Can” (1973) a number one hit in the U.K., Japan, Australia, and Europe — which only reached #56 on the U.S. charts after its stateside release three years later. Clad in tight black leather, pounding out a bass line to complement the killer drum beat, growling the nonsensical lyrics with abandon, Quatro owns the stage. Phrases like “archetypal male impersonator” and “female cock rocker” often get bandied about when discussing Quatro, but with her petite figure and bouncy hair, she’s never less than feminine — strictly on her own terms, of course. Even on her earliest recording, 1964’s “What a Way to Die,” recorded with The Pleasure Seekers, an all-girl garage band featuring sister Patti on guitar, she bucked the trend. Let other girls wail sappy songs about boys who got away; fourteen-year-old Suzi rasped, “Well, I love you baby / I’m telling you right here / please don’t make me decide between you and a bottle of beer.”

CAN THE CAN
WHAT A WAY TO DIE

On his or her birthday, HiLobrow irregularly pays tribute to one of our high-, low-, no-, or hilobrow heroes. Also born this date: Curtis Mayfield.