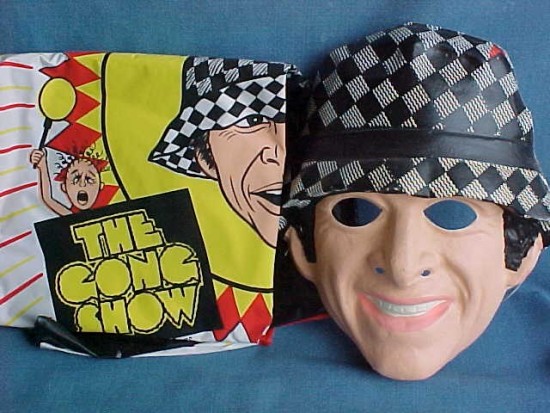 CHUCK BARRIS (born 1929) is an author, awkward TV host, successful game show producer, media innovator, song writer and self-described assassin. He is a lowbrow who started his career as a songwriter (“Palisades Park”) and ended up producing game shows for the Me Generation. In the ’70s, Americans ate up his sly send-ups of traditional daytime programming. He made millions producing The Dating Game, The Newlywed Game, The Gong Show, and the $1.98 Beauty Show. Barris exhibited a twisted genius for mocking convention with a counterculture sensibility; for example, the short-lived Three’s a Crowd (1979–80) outraged those who regarded a competition pitting wives against their husbands’ secretaries as sexist. Barris — AKA “Chuckie Baby” or “Sunny Sixkiller” — has manifested so many contradictions that he just may be pop-culture’s first postmodern man. He composed catchy music for most of his shows, hosted The Gong Show with amateurishness zeal and delivered meta to the masses with his “unauthorized autobiography,” 1984’s Confessions of a Dangerous Mind — an outlandish prank that no one knew what to make of. Now semi-retired, one imagines Barris watching current TV programming and muttering, “Après moi, le déluge.”

On his or her birthday, HiLobrow irregularly pays tribute to one of our high-, low-, no-, or hilobrow heroes. Also born this date: Allen Ginsberg, Suzi Quatro, Curtis Mayfield.